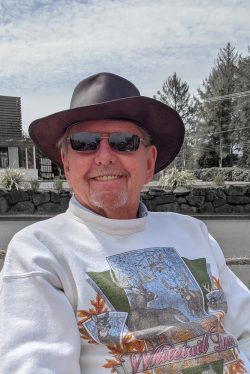 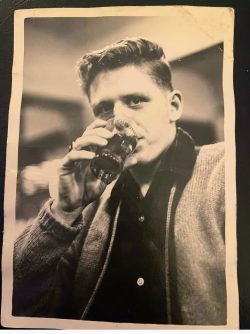 Celebration of Life will begin at 4:30 pm Thursday June 23rd with military honors at 5pm at Timber Linn Park Shelter #2. Donations in memory of Bill can be made to Multiple Sclerosis Association of America at mymsaa.org.

William Rodney Rosier Jr., 76, of Sweet Home passed away peacefully at home Friday while being comforted by his beloved wife, Cindy Rosier, grandson Alex Rosier, and step-grandson Orin Williams on April 22, 2022. He was born in Oregon at North Bend hospital to William Rodney Rosier Sr. and Annette Franklin on August 12, 1945.

He attended Oakridge High School and served in the Army. He served in Germany and Scotland. Bill met lifelong friends and had colorful stories, mostly due to mischievous behavior, during his time in the military.

After Bill’s service, he returned to Oakridge where he married Brenda Putnam. They had their first child, Bart, before moving around a bit, ultimately settling in Albany where Cheryl was born in 1979.

Bill worked as an auto body and paint specialist and owned businesses in Albany for years. In his later years, Bill lived in Sweet Home where he continued to create custom hot rods and paint cars for many years.

Bill touched the lives of many people and always took time to help others. He loved the outdoors and admiring God’s scenery. He and his wife Cindy enjoyed trips to the coast, camping and spending time with family, as Bill would say ‘His favorite place to be’. His sincerity and giving heart comforted many in their time of need. Bill loved sharing a great story, pulling pranks and telling jokes. His smile was infectious and could light up a room.He was generous with his time and wisdom and had a way of making an impact and changing the lives he touched for the better.

Shortly before Bill left his loved ones on Earth, he received his 50-year sobriety coin from Alcoholics Anonymous. He was active in the program for years after a dear friend convinced him to attend a meeting when Bill struggled with alcoholism in his early life. He enjoyed helping others in need of counseling or support. He met many individuals over the years that he hoped to help in the same way that he was helped years before.

He was loved by his community of family, friends and colleagues and was a master of his trade. Truly an artist. His custom hot rods were decorated with his own paint designs and have been featured in numerous magazines and have won countless awards at classic car shows. His work was timeless and authentic. His humor, his love and his Smile will not be forgotten by those who knew him.

Bill is survived by his beloved wife Cindy Rosier of Albany; his beloved children Barton (Bart) Rosier of Medford, Cheryl (Tootie) and her husband Jamie Mumm of Beaverton, Corinna Zib of Albany; and their beloved mother, Brenda Rosier; grandchildren Alex Rosier, Dylan Mumm, Brayden Rosier, and Ashlyn Mumm; step children: Brad Samard, Danielle Samard and Matthew Samard; seven step-grandchildren that brought him so much joy and many memories during the final years of his life.

He is preceded in death by both of his parents, as well as his brother, Ronald Ottomeier, and his sister Cheryl B. Shapiro.

Celebration of Life will begin at 4:30 pm Thursday June 23rd with military honors at 5pm at Timber Linn Park Shelter #2. Donations in memory of Bill can be made to Multiple Sclerosis Association of America at mymsaa.org.
Sweet Home Funeral Chapel is handling arrangements. www.sweethomefuneral.com