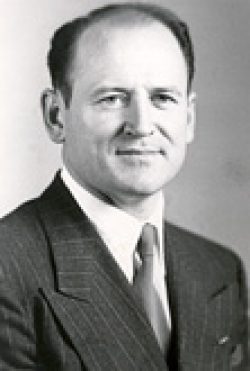 William Henry Johnson, age 89, died at his home of 57 years located off of Sunnyside Drive in Foster, Oregon on Saturday, November 17; he was 89 years old.

William was born in Fargo, North Dakota on November 14, 1918. He was the last of the four children of Henry and Adelaide McClintic Johnson. Brother Howard survives in San Diego, California.

After his mother’s death in 1923, he moved with his grandmother to Oceola, Iowa, where she found a home for him with Arthur and Harriet Smith. William graduated from Oceola High School with honors in 1939. With a friend, he outfited a Ford touring car to travel through the states, and they worked their way west wanting to eventually reach Mexico. (He finally reached Mexico on his BMW motorcycle in 1978.) While visiting friends in Sweet Home, he took a job at the Santiam Mill and remained in Sweet Home until the prospect of being drafted was imminent.

He returned to Iowa and enlisted in the 113 Cavalry Group Mechanized Troop F. This unit trained in Camp Bowie (near the Mexican Border) and Camp Hood in Texas, and Camp Livingston and Camp Polk in Louisiana. After training, he was given the assignment of Supply Seargant. In early 1944 the 113th was sent to the European theatre. In February 1945 he was awarded the Bronze Star for ‘superior performance of his duties enabling supplies to reach troops in an efficient manner,”… efforts which reflect great credit upon himself and the military service.

While training at Camp Bowie at Brownwood, Texas, he met and married his wife of 64 years, Sara Elizabeth Driskill, on Dec. 5, 1943. At the close of the war, he returned to Texas and moved his family to the Pacific Northwest, where he eventually studied education at the University of Oregon. He earned a bachelors degree in 1949 and a Masters of Science in 1957 from the University of Oregon. He began his teaching career in the fall of 1949 at Sweet Home Union High School. At Sweet Home he taught Special Reading, French, and English.

When the family purchased Trails End Ranch off Sunnyside Drive, summers were full of ‘ranch related’ activities. However, for many years, the month of August was set aside for family camping trips to many wonderful places west of the Missisippi.

He retired from teaching in 1980. After retirement he became active with senior advocacy, among other things. William is a llife member of the Sweet Home Senior Center and a member of the United Methodist Church of Sweet Home. In 1978 he returned to his love of riding motorcycles, the primary mode of transportation of the mechanized cavalry, and over the years made trips lasting 1-3 months to Mexico, Alaska, the southern states, the eastern seaboard, Guatamala, Canada, and many shorter trips. William and Sara also traveled, by plane, to Mexico, Costa Rica, and Guatamala.

In 1988 William organized a group of local volunteers with goal of ending field burning in the Williamette Valley. The organization was called ENUF (End Noxious Unhealthy Fumes). This hard working group gathered signatures from every county of the state in an attempt to place an intiative petition on the Oregon ballot in 1994. While it didn’t make it to the ballot, the Oregon legislature was moved to act; curtailing field burning smoke to a tolerable limit.