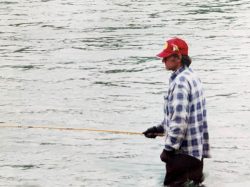 Graveside services with military honors will be at 11:00 a.m. Friday, February 5, at Twin Oaks Memorial Garden and Mausoleum.

William Charles Wisecup, 83, of Albany, Oregon passed away Wednesday, January 27, 2021. He was born in Grants Pass to William and Charless Anna (Abplanalp) Wisecup. Bill was raised on Gibson Hill in North Albany, the youngest of four children.

Bill served in the United States Navy for four years aboard the U.S.S. Roanoke.

When he returned home from the Navy he reunited with this high school Sweetheart, Donna Mae Misner. They were married on July 1, 1961. Together, Bill, Donna, and their son, Tim, made their first home in Albany.

Bill was a Union Construction Electrician Local #280. He worked in Oregon, Washington, and Idaho and on the Alaskan Slope.

Bill and Donna enjoyed fishing and traveling. They always went to Alaska in the summers. They purchased property there and built an RV pad, a shed, and set-up camp on their property. Alaska was their “Summer Home” eight years in a row. They would always send fresh halibut to their children and brought home cases of home canned salmon, halibut, and clams canned by our mother. Mom, always out-fished Bill. She landed a 42-pound King Salmon, and our Dad’s biggest salmon was a measley 38 pounds out of the Kenai River. Dad’s dream was to always be fishing or crabbing, anything to be on his boat the “Donna Mae”. He had the best stories and was always ready to make a small wager on the biggest fish caught. Lots of good times.

He enjoyed Friday night poker with his friends at the Albany Eagles #2255. Bill was a member of the Moose Lodge #1942.

Our Father was a good provider, and took great care of our Mother. He will be greatly missed. He’s gone Fishing!!

Graveside services with military honors will be at 11:00 a.m. Friday, February 5, at Twin Oaks Memorial Garden and Mausoleum.