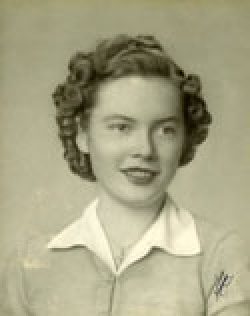 Virginia Ruth Murray, 86, of Sweet Home was born at her grandparents’ home during a snow storm in Hanston, Kansas to Eugene and Retta (Abbott) Horton. Her dad worked for the railroad and the Farmers’ Co-op delivering grain and gas to farmers. Her mother, Retta, was a school teacher. At 22 months old, Virginia contracted polio which led to surgery. God’s designs for her were decided before she was born. She would exist for the glory of God. Virginia knew that the longest life of any person on earth is like a vapor’s breath on a cold winter morning in Kansas. She lived her life knowing that, “To live is Christ and to die is gain.” (Phillippians 1:21.) At six years old, Virginia placed her faith in Jesus Christ, glorifying Him in everything she did. Virginia experienced the joy of seeing her son, Keith, make the same decision for his life.

As a little girl, Virginia and her cousin, Betty, played paper dolls. They pretended to be movie stars. Betty was Loretta Young and Virginia was Ginger Rogers. As a paper doll, Virginia could dance up a storm.

Virginia was the oldest of four with three younger brothers: Larry, Dale, and Dean. The thing she and her brothers squabbled about the most were the peanuts and red hots her dad would bring home after paying the grocery bill that were to be equally distributed to the kids.

In 1941, Virginia’s family moved to Portland, Oregon where she finished her last two years at Franklin High School. She then worked: for an insurance company as a secretary; at a hardware store where she kept the store stocked and baby chicks ordered; and at a dry cleaners with Loretta Young, that is, her cousin, Betty.

When she was 21, she met and married Kenneth Murray on Nov. 16, 1946, just one year after his military service. The happy couple moved to Van Nuys, California in 1951, where their son, Keith, was born. Virginia worked at Lockheed Martin Aeronautics.

Virginia and Keith were avid fans of the LA Dodgers and those delicious Dodger Dogs. She was the most nurturing mom as she centered her home around her faith in the Lord, and possessed the most generous hospitality towards everyone.

In 1963, they made Glendale, Oregon, their home on a few acres where they raised Pinto horses, planted fruit trees, got involved in Farm Bureau, and raised their son in the country. She worked for the Glendale School District for 22 years. Virginia’s gifts were utilized at Olivet Prebyterian Church showing praise to God.

Virginia’s journey through her polio was filled with God’s grace. She has always been a comforter and encourager to people around her, exemplifying our Lord’s ability to bring peace and strength and allow U-turns.

Virginia entered the presence of Jesus Christ on May 2, 2011. Virginia couldn’t have been prouder of or more thankful for her family. Virginia’s husband, Ken, preceded her 11 years ago. Surviving Virginia are: her son, Keith and his wife Karen; granddaughter, Abby Virtue; grandson, Brian Murray and his wife Tonia; grandchildren, Katie, Daniel, and Nathan Virtue; Audrey, Tanner, Ruby, Julia, Camryn, and Grace Murray; and Virginia’s brothers, Larry and Dean Horton.

Virginia is now with the One in whose presence is fullness of joy and at whose right hand are pleasures forevermore. When Job lost his children he said, “The Lord gave, and the Lord has taken away; blessed be the name of the Lord.” The Lord gave us Virginia, she was a gift. We had her, and we have her still — not in our arms, but in our memory; not in our home, but in our heart; not on earth, but in heaven.

“Now the dwelling of God is with men, and he will live with them. They will be his people, and God himself will be with them and be their God.” Rev. 21:3. Our believing loved ones will be there, too, and all will be sin-free, perfect, holy and pure (2 Cor. 5:1 and Phil 3:20). It’ll be a place where we will see His face continuously. Virginia has a new body now. She will dance forevermore with her Lord and Savior.