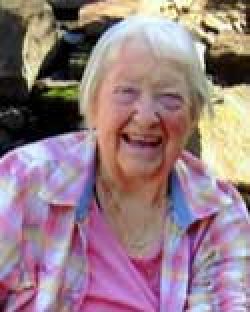 Virginia M. (McKinley) Carson, 87, a long-time resident of Sweet Home and Hopewell, Oregon, passed away Tuesday in Lebanon, Oregon. She was born in Hopewell to George Kirby and Rebecca (Sohn) McKinley, the youngest of nine children. She was born at home and delivered by Dr. Lott who came from Amity in a horse and buggy.

Virginia married Everett D. Carson on October 12, 1947 in Newberg, Oregon. They moved to Sweet Home where they raised their three children: Ron; Cody; and Frank Carson. Everett passed away December 5, 1963.

Virginia worked at the Del Monte cannery in Salem, picked hops, berries, and beans, and took care of her family. After raising her children, Virginia split her time between her family’s farm in Hopewell and her home in Sweet Home.

Virginia loved gardening, planting flowers, canning, hand writing cards and letters to friends and family, sneaking food to the neighbor’s pets, and taking care of her pet chicken, Tilda. When she wasn’t attending to her yard or home, she was attending her great-grandchildren’s sporting events. She was a simple woman with a simple life, a permanent smile, and a heart of gold.

She is survived by her sons, Ron Carson(and Sally Skaggs) and Cody Carson (and Joey) of Lebanon. She was blessed with five grandchildren: Kelly and Missy Carson of Sandy; Jenny Carson-Phillips and Doug Phillips of Albany; Jake Carson of California; Crissy and Andrew Buck of Springfield; and Tommy and Dre Carson of Lebanon. Her grandchildren gave her six amazing great-grandchildren: Austin Carson; Rogue Phillips; Colby Carson; Ethan Carson; Kemper Carson; and Elise Buck.