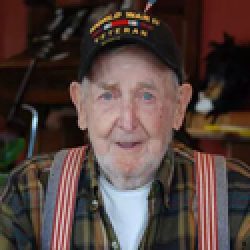 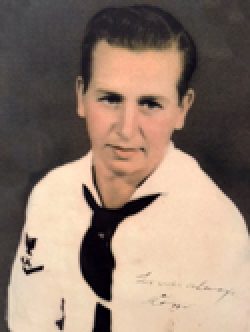 Memorial Service with Military Honors will be at noon Saturday December 20th at the Sweet Home Evangelical Church Activity Center with a reception following. Private family graveside was held at Gilliland Cemetery.

Thomas Rothmer Hufford, 92, of Sweet Home passed away Monday, December 8, at the Albany General Hospital. He was born to John Frank and Mamie Estelle (Tolbert) Hufford, in Crawfordsville on December 2, 1922. Tom was the seventh of nine children. His family traveled extensively on the Pacific Coast as migrant workers before finally settling east of Foster in the area now known as Hufford Hill. Tom was a true outdoorsman, he hunted with his older brothers and even killed a cougar with a slug loaded shotgun at age nine. His family farmed and logged the area and built their own log house and surrounding out buildings. He attended grade school on Hufford Hill at Wildwood School. There he met the love of his life at age 11; her mother was his school teacher. Tom left school at a young age to help support his family, working primarily in the timber industry.

Following the attack on Pearl Harbor, Tom, like many young men of the era was eager to serve his country. He enlisted in the United States Navy September 28th 1942 at the age of 19. He served as a Gunner’s Mate First Class on the USS Dewey, and always had plenty of lip for his superior officers. During his time in the service, Tom was stationed in the South Pacific and visited many of the countries there. He also survived Typhoon Cobra that caused the ship to do an 80-degree roll, on its side in the water, and then right itself. Tom was honorably discharged December 6, 1945 and for his time in the service was awarded the Good Conduct Medal, Philippine Liberation Medal, American Area Campaign Medal, the Asiatic Pacific Campaign Medal (10 Stars), and the World War II Victory Medal.

When discharged Tom rode the train from New York, home to Oregon. There he reunited with his childhood love, Mardelle Nothiger and they wed in Stevenson Washington April 6, 1946. He and Mardelle settled on her family property and raised five children together. Tom worked as a hypo logger and log truck driver for DHP of which he was a partner. He also worked with Guy Jeppsen, Charlie Vaughn and then eventually Timberline Logging, which is owned by his son, Teddy. Using his business skills, Tom and Mardelle opened the Cedar Shack Drive-In in 1965. To this day, the business is run by their family.

In 1990, Tom received a formal invitation and attended the decommissioning of the USS Dewey in Charleston, South Carolina. In 2012, Tom was able to tour the new USS Dewey during the Rose Festival where he was treated as guest of honor. His photo with the ships commander was engraved and placed in the hall of honor where it will remain until the ship is decommissioned.

Tom was an active member of the community, serving for 69 years as a member of the American Legion and a member of theVeterans Club Executive Board for many years. He was an American Legion Commander for six years; he also coached the Legion Baseball team and acted as driver and equipment manager. Through the American Legion, Tom helped to raise money for the community swimming pool and donated money for the building of the Lebanon Community Hospital. During the years that his children were in school, he was actively involved. He served as the first president of the Band Boosters Club. Even at home, Tom served providing food and shelter for those in need. For his efforts in the community and surrounding areas, Tom received numerous awards. He was Veteran of the Year in 1995; in 1998 he won the Distinguished Service Award. He was one of the inaugural recipients of theAmerican Man Award in 2007. He was also Parade Grand Marshall for the Sportsman’s Holiday Parade. He was the inspiration for the creation of a car show held annually in his honor. Grampa Tom’s Get Together kicked off the tourist season in Sweet Home for 20 years.

Tom reluctantly retired from driving log truck at age 87, but stayed busy visiting with friends and family at the Cedar Shack. He never knew a stranger. He enjoyed hunting, car shows, collecting Studebaker’s and reading. Tom was a life long learner, you never saw him without a book in his hand.

Memorial Service with Military Honors will be at noon Saturday December 20th at the Sweet Home Evangelical Church Activity Center with a reception following. Private family graveside was held at Gilliland Cemetery.