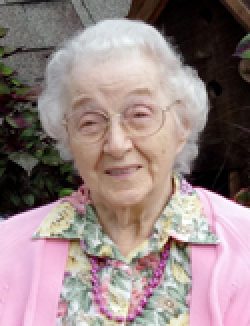 Susie Gertrude Daniels, 103, of Sweet Home passed away Wednesday. She was born in Humboldt, South Dakota to Thomas M. and Gertrude R. (Crowder) Crowell. Photo is of Susie in 2013 at 103 years old.

She was the third of 10 children. The family eventually moved to Revillo, S.D. where she attended school. She lived with an Aunt and Uncle in Del Rapids, S.D. and attended High School one year. She also learned to play and teach piano. She met Fred Daniels while living and attending church in Revillo, S.D. They were married March 29, 1933 in Milbank, S.D. and lived in Revillo until they came to Sweet Home in 1940 where they continued to reside.

Susie was a homemaker, mother of nine children and a piano teacher. During her years of living in Sweet Home she taught piano to her own children as well as others living in the area. Her children also learned to play other instruments and sing together. They were known as The Musical Daniels Family and traveled to different churches in the area to present a musical program. She was also active in teaching children and doing Women’s Ministries in the churches they attended. Susie and Fred enjoyed traveling and camping in their RV during their retirement years. She also made many quilts and afghans for family members.

Three years after her husband’s death, Susie moved to Wiley Creek Retirement Community. She had lived there almost 14 years and is leaving behind many residents and staff who became her friends. She was a people person and loved being at Wiley Creek. She had a stroke in May of 2006 which affected her speech and ability to communicate. She taught herself to talk again and did a remarkable job with her determination to learn.

She is survived by daughters Betty Bagley, Norene and Steve Nelson, Sally and Rod Wolfer all of Sweet Home; daughter-in-law Jan Daniels of Albany; son Marvin and Carlene Daniels; daughter Janet and Jerry Hillyard all of Nampa, Idaho; son-in-law Lloyd Emry of Tigard; daughter Judy and Homer McAdams of McMinnville; 22 grandchildren, 39 great-grandchildren, and three great, great grandchildren and one due in July; and many nieces and nephews.

Susie was preceded in death by her parents, two infant children, her husband Fred in 1997, son-in-law Arvis Cannon in 2002, daughter Luella Emry in 2005, son Clifford and son-in-law Timothy Bagley in 2006, and son Howard in 2010. Susie survived all nine of her siblings and spouses, as well as her husband Fred, and all four of his siblings and spouses.