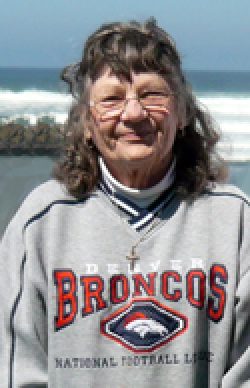 Because Sharon was a huge football fan, a “Celebration of Life” is also scheduled for Thursday evening, October 6, at the Brownsville Tavern from 5:00 to 8:00 p.m., during the Oregon Duck vs. Cal Bears football game.

In lieu of flower arrangements, Sharon requested her friends give live plants and flower pots for a garden to be created in Sharon’s memory.

Sharon Theresa Williams, 72, a long-time resident of Brownsville, passed away on Saturday, September 17, after a three-year battle with ovarian cancer. Sharon passed away Saturday afternoon peacefully at her Brownsville residence with her family by her side.

Sharon was extremely active in her personal and community life. For nearly a dozen years Sharon worked at the Fred Meyer store in Albany as a member of the Oregon Retail Employees Union. Wanting to work closer to home, Sharon then worked at the Brownsville Dari-Mart as a meat cutter and cashier for nine years. Sharon openly admitted she loved working at Dari-Mart, because she was able to meet so many new people and see good friends on a daily basis. After leaving Dari-Mart, Sharon remained active and worked for several years part time at the Brownsville Liquor Store.

Sharon was born in Santa Monica California to Robert and Bernice Farley. She attended high school at William S. Hart in Newhall, California. After graduation, Sharon worked as a hair and fashion model in the Los Angeles area. Following a short career in modeling, Sharon married and had two sons and a daughter. In 1969, Sharon moved her family to Albany to live closer to her family’s ranch in Brownsville.

Sharon and her family moved from Albany to Brownsville in 1970 and have remained in the same home since that time. At the time of her move to Brownsville, Sharon was newly married to Orin Greg Williams whose Halsey family worked in the grass seed industry. Sharon loved the small community of Brownsville and through the years gained wonderful and longterm friendships with many people. She absolutely loved people, and people loved her. In fact, Sharon would admit to making plans to run a ten-minute errand to the downtown area, and then return home more than an hour later saying she ran into a friend and just had to catch up.

Besides enjoying her work, Sharon enjoyed being part of the local celebrations, including the Pioneer Picnic and Central Linn sports. She also enjoyed four-wheel mud and barrel racing, camping in the mountains, and outdoor barbeques with her family and friends. Sharon was a huge sports fan. During football season, you would always find her rooting for the Oregon Ducks on Saturdays and her Seattle Seahawks on Sundays. During the week, it’s likely you would also find Sharon shopping or donating to Sharing Hands. Helping others was extremely important to Sharon. Whether it be helping a family member or friend in need, or helping collect food for families during the holidays, Sharon was always willing to give and share her smile and help with others.

Sharon was preceded in death by her parents, Robert and Bernice Farley, and her brother, Robert Farley, Jr.

Sharon is survived by: her sons, Tandy Williamson, Warren Williamson and Greg Williams who reside in Brownsville; her daughter, Tracy Haines, who lives with her husband, Don, in Dallas, Texas; her sister and brother-in-law, Kathi and Doug Benson of Sweet Home; and five grandchildren.

The family would like to thank several people for their gracious support and friendship: Bob and Cyndi Anderson; Randy Ginn; Mike and Joann Neddeau; Father Fred Anthony; Diane Meachum; Charlene Shipley; the wonderful nurses of Evergreen Hospice; and all of the wonderful neighbors who provided food and care during Sharon’s illness.

A funeral mass is scheduled for 12:00, noon, Wednesday, October 5, at the Holy Trinity Catholic Church in Brownsville.

Because Sharon was a huge football fan, a “Celebration of Life” is also scheduled for Thursday evening, October 6, at the Brownsville Tavern from 5:00 to 8:00 p.m., during the Oregon Duck vs. Cal Bears football game.

In lieu of flower arrangements, Sharon requested her friends give live plants and flower pots for a garden to be created in Sharon’s memory.