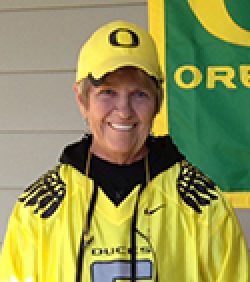 In lieu of flowers, please send a donation in Sandy’s name to your favorite animal sanctuary.

Sandy Meador, 70, of Sweet Home, Oregon made her transition on Sunday, March 13, after a courageous battle against pancreatic cancer. She was born in Maywood, California to Otis Elton and Melba Leota (Hight) Meador.

Sandy spent her childhood riding her horse through the pre-development orange groves of Southern California. Her love for animals resulted in her first dog grooming business at the age of 16. When she moved to Big Bear, Sandy continued with dog grooming and also designed and developed mobile dog grooming vans.

Sandy moved to the desert in 1986 and worked as an EMT and FedEx driver before using one of her designed vans to become one of the first mobile dog groomers in the desert. Her grooming service was called Sandy’s K-9 Cutting Green. In 1995, Sandy fulfilled one of her dreams by moving to Oregon,where she could support and cheer on her favorite football team, the U of O Ducks. In Oregon, she continued grooming until she retired.

Sandy had a deep love and respect for all animals, especially elephants, and was actively involved in supporting various animal groups.

Well known for her quick-witted sense of humor, Sandy always kept her friends laughing. Her vast knowledge of many subjects allowed her to strike up a conversation with people of all ages and backgrounds.

Sandy had many hobbies, including gardening, fishing, music, camping, and traveling.

Those of us who are left hereheartbroken know the heavens are celebrating the arrival of Sandy’s beautiful soul with celestial fireworks.

Sandy is survived by her partner, Debbie Lane, of Sweet Home; her beloved Maltese, Kanessa Mae, who was constantly by her side; “sister” Rita Paul and husband, Bill, and their children, Joey and Jennifer, of Litchfield Park, AZ; best friends Judy Gaudiano and Emily DiSimone of Rancho Mirage, CA; and many two-legged and four-legged friends throughout California and Oregon.

She was preceded in death by her parents, Otis and Melba Meador.

In lieu of flowers, please send a donation in Sandy’s name to your favorite animal sanctuary.