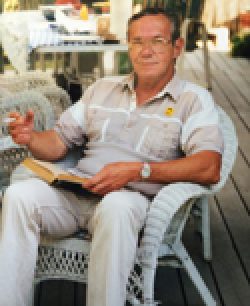 Memorial contributions can be made in his hame to the Sweet Home Public Library.

A memorial service will be held 1:00 p.m., Saturday, July 18, at the Sweet Home Funeral Chapel, that is handling the arrangements.

Sam Henthorne, 69, of Foster, Oregon passed away Thursday, June 11th, surrounded by family and friends, at the comforting at compassionate Evergreen Hospice House in Albany, after an extended battle with leukemia. He was born to Bertha E. (Peden) Henthorne and Samuel G. Henthorne in the area of Valliant, OK.

Sam worked at Sweet Home Sanitation while in high school. He later worked at Willamette Industries, Boeing, MacDonald Douglas, Zirtec in Albany, and many other jobs. He lived in many places in Washington, California, and Oregon. He had a special affinity for Baker (City) and all the wild exploring that can be had in the area.

Sam helped many people and greatly enjoyed doing projects and chores for those who could not do them themselves. He also enjoyed exploring, hunting, fishing, wild collecting, and most other outdoor activities. He was an avid gardener and rockhound. Sam had a voracious, unquenchable hunger for books and was rarely seen without a book in hand. Sam found great joy in sharing all his interests, passions, and knowledge with others.

Sam and Claire found friends, faith, and Fellowship at a meeting at the Holley Grange in 2000, this return to faith was life changing for them both and continues to have a great impact. He found a great deal of peace sitting on the deck, watching the wildlife, at his home on the bank of the river at the South Santiam Cottages, vacation rentals that are still in operation by his wife, Claire, and daughter, Lisa.

He was preceded in death by: his brother, Dennis Henthorne, in 2005; and his children, Kenneth Henthorne (2004), Christa Raymond (2009); and an infant granddaughter.

Memorial contributions can be made in his hame to the Sweet Home Public Library.

A memorial service will be held 1:00 p.m., Saturday, July 18, at the Sweet Home Funeral Chapel, that is handling the arrangements.