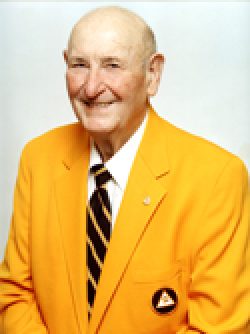 Royal Clifford Groshong, 88, of Florence, Oregon passed away Wednesday. He was born in Holley to Elmer Ray and Mary Ann (Conner) Groshong.

He served in the United States Navy during World War II from 1944 to 1946. He was a Seaman First Class on the USS North Carolina BB-55 and earned four medals.

Royal lived several years in Holley, Alaska, and Florence, and then returned to Sweet Home where he lived for 35 years. He retired to Florence in 1998.

He was in the logging industry in and around the Sweet Home area.

He was a lifetime member of the Loyal Order of Moose and was a charter member of the Florence Moose lodge in 1961. He was the Endowment and Admissions Fund Chairman for the Oregon Moose Association for many years and in 2007 he received the Pilgim degree; the highest degree of merit awarded by Moose International.

Royal enjoyed hunting, fishing, watching sports, and traveling. He loved socializing with friends and family where he commonly was the life of the party.

He is survived by: son Arlyn R. Groshong and his wife, Camatha, of Lebanon; and grandchildren, Kenzie and Conner.

Royal was preceded in death by: Shirley L. Groshong in 1997; nine brothers; and five sisters.