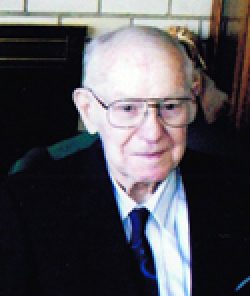 He was born in Coeur d’ Alene, Idaho, the son of William Arthur and Sylva (Holler) Robeson. Roy was raised Methodist. His family moved to Toledo when he was 12 where he worked in the woods, logging. They later moved to Sweet Home where he continued to log, build roads, and fight fires. Roy owned a gas station in Sweet Home. He later became a sawyer at a mill in Sweet Home.

It was in Sweet Home that he met Florence Birdsall. The couple married September 1943. They had three children: Sandra; Joanne; and Daniel. Roy built each of the three houses they lived in. He was very handy and could build almost anything. The family moved to Newport and later McMinnville where he continued to work as a sawyer and millwright. Roy and Florence moved to Keizer in August of this year.

Roy loved spending time with his family and friends. He also loved to camp and enjoyed the outdoors with such activities as riding motorcycles, riding horses, water skiing, fishing, hunting, golf, and swimming. He loved to travel and see new places. He also enjoyed building things and playing guitar.

Roy is survived by: his wife, Florence; children, Sandra, Joanne, and Daniel; nine grandchildren; and 13 great grandchildren. He is preceded in death by his siblings, Loren, Lorraine, Ruby, Hank and Bill.