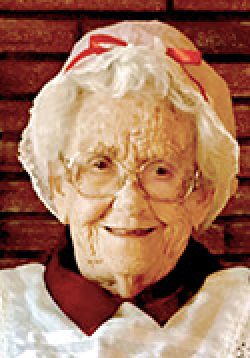 Rosanna’s wonderful life will be celebrated at an upcoming family reunion where, among other memories, we will all sing ‘Pine Trees in Heaven’.

She was the third of seven, the oldest daughter, and was raised on the family ranch on Iron Creek. ‘Rosie’ was the ‘last one standing’, outliving all of her siblings, in-laws and related spouses in her long and adventure filled life.

Her elementary education was in a one room school across the Salmon River from Iron Creek. Rosanna met Leland (‘Lee’), her first and only love, when he moved into a log cabin on Iron Creek and was in her class along with her brothers, Chuck & Gene. The family (without Pappy) moved to Grants Pass, Oregon, in 1937, a lower elevation for Clara’s heart condition.

Rosanna graduated from Grants Pass High in 1939. Lee pursued Rosie by riding horseback from Salmon to Grants Pass along with her brother Chuck and Pappy over a 2-month period, working odd-jobs along the way.

Lee and Rosanna were married on January 4, 1941 in Grants Pass, Oregon. The couple made their first home in Gilmore, Idaho where Lee hauled ore from the mines and later returned to the Iron Creek Ranch to work with Pappy. Their four children, Clara Lee, Mildred Jean, Claudia Karen and Clifford Paul, were born while living at the Ranch. Lee was the love of her life and their 65-year marriage was filled with dancing, laughter and growing an honorable family and more dancing.

Rosanna also loved gardening, cooking, canning, painting, pinochle, and many artistic crafts over her many years.She was an avid reader and very possessive of her collection of eclectic books. She is remembered for always having a book open to read and sharing stories such as ‘Little Britches’ with the children. She also accumulated a vast collection of Salt & Pepper shakers, and later ‘bobblehead’ dolls.

They moved to Berlin, Linn County, Oregon in 1951, where she was a beloved (and strict) school bus driver. She also worked for JC Penney’s and as a rural mail carrier.They lived briefly in Alaska, and moved to Lebanon, Oregon in 1965 where Lee worked for the Oregon Highway Department.

Mom is blessed with many friends and they were always welcome for a delicious meal and laughter at their home. Upon retirement they returned to Salmon, Idaho on Iron Creek Road at Slide Creek where they built a log home off the power grid. Although Lee passed in 2006, Rosanna continued to live in the Iron Creek home until 2015, earning the nickname ‘Crash’ for several accidents that she swears didn’t actually happen (she never suffered a scratch) when health concerns took her back to Oregon. Her greatest desire was to be back on the Ranch in Idaho where she will be buried in the family cemetery.

Rosanna’s wonderful life will be celebrated at an upcoming family reunion where, among other memories, we will all sing ‘Pine Trees in Heaven’.