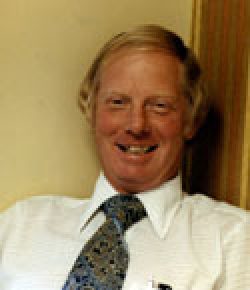 Robert Donald Hostetter, 86, of Sweet Home, Oregon passed away Saturday, September 21, 2013. He was born in Midland, Indiana to Roy and Lula (Cole) Hostetter.

Bob grew up in Southern Indiana. He spent his youth living in a family-run boarding house for the railroad workers. His grandfather, Omar Cole, was the rail master for Monon Rails.

After graduating from Indianapolis Tech High, Bob enlisted in the United States Navy and served from 1944 to 1946 aboard the destroyer, Haulsey-Powell.

He married Susan Bryden in February 1948. Robert worked for Sinclair Research in Harvey, Illinois and held a second job to support their growing family. In 1965, he changed careers and worked at Prudential as a salesman where he excelled due to his friendly personality.

Bob enjoyed golf, basketball, trains, building, and mechanics. He was a loving father and friend who will be greatly missed.