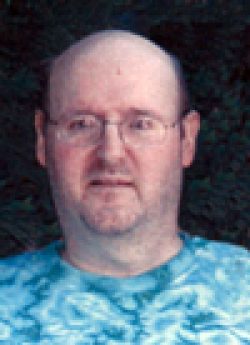 Funeral Services will be at 4:00 p.m., Tuesday, April 15, at the Church of Jesus Christ of Latter-day Saints in Lebanon, Oregon. Services will conclude at the church.

Robert Dean Meyers, age 44, of Sweet Home passed away Monday, April 7, surrounded by family. He was born in Eureka, California to Richard and Collette (Courtnier) Meyers. His family moved to Sweet Home in 1970.

He attended Hawthorn Elementary School and graduated from Sweet Home High School in 1982. Baptized in the Church of Jesus Christ of Latter-day Saints in 1972 and served an LDS Church mission in 1983 in Raleigh, North Carolina.

He was a very avid scouter in Boy Scouts of America, involving his immediate family as scouts and assistants. Extremely encouraging to all his scouts, he taught them leadership, responsiblity, and acceptance of others through his example. He was an Eagle Scout, a Silver Beaver, a member of the Order of the Arrow, SERCA, a multiple merit badges counselor, a den leader, a Webelo leader, a Boy Scout, a Venture crew advisor, and a trainer for all Scouting positions. He also served as Assistant District Commisioner, Roundtable Trainer, and Pack Committee Chairman. He was involved with the Scouting for Food, Goodwill/Good Turn, and pinewood derby events, and was a district awards committee member. Robert also helped begin the Calapooia Cub Scout Lock-In.

Roberts interests were family, drama, theater, speech, architecture (both residential and commercial), camping, old movies, especially “classic comedy and musicals,” Shakespeare, roses, all music (he workedd as a DJ for KFIR in his youth), handmade gifts, history, pets, and medieval topics, including “castles, swords, and dragons.”

Robert was diagnosed with ALS 15 and a half years ago. He always persevered and made the best of things. He always had patience with himself, the disease and those around him.

Robert grew up around Disney and loved Disney things as an adult. His favorite character was Dopey, and Goofy wasn’t too bad either. He was a perfect husband and daddy with an incredible sense of humor and an instant connection with people. He was a kind and caring person who had a special way of making people feel special and loved. He hated argyle patterns on things and peas.

He was preceded in death by grandparents, Harvey and Dorothy Meyers, and grandfather, Carroll Courtnier, aunt, Marge Welch, and uncle, Douglas Courtnier.

Memorial Contributions can be made to his children’s education fund at Linn-Co Federal Credit Union.

Funeral Services will be at 4:00 p.m., Tuesday, April 15, at the Church of Jesus Christ of Latter-day Saints in Lebanon, Oregon. Services will conclude at the church. Sweet Home Funeral Chapel handled arrangements