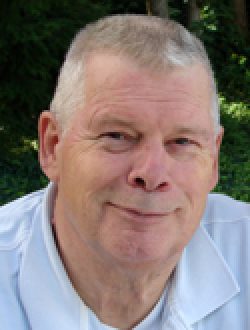 Bob grew up in Portland and attended Madison High School and Benson-Polytechnic High School, working at the radio station at the school.

He enlisted in the Army in the early 1960s after high school. He served as a Military Police Officer in Ethiopia, Africa until he was able to serve on the Armed Forces Radio. While in the military in Salinas, California, he worked at a radio station on the weekends.

After receiving his honorable discharge from the Army, Bob started dating his “bride.” After proposing to Bettie Sue, they married and moved to Astoria, and Bob took a job at KAST radio.

Bob attended Ogden’s Radio Operational Engineering School in Burbank, California and received his First Class Broadcasting License. Bob and Bettie Sue moved to Pendleton, Hermiston, and then Salem, taking jobs that increased his knowledge and skill in the radio industry; going from DJ to sales, to management and part owner of KGAY in Salem.

In 1989, Bob lived his dream. He moved to Sweet Home, Oregon and purchased and operated KFIR radio. He built two more stations over the course of the twenty years that followed their move to the area.

Bob was a member of the Oregon Association of Broadcasters, Rotary, and the Elks Lodge, and was a member of Fir Lawn Lutheran Church. He loved his wife, his family, his community, and going camping, but Bob loved radio!

He was preceded in death by sister, Nancy Ratter.