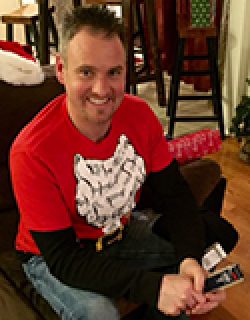 A celebration of Neil’s life will be at 2:00 p.m., Friday, February 5, at Sweet Home High School Auditorium. In lieu of flowers, donations can be made in Neil’s name to Wells Fargo, GoFundMe Neil Nightingale Funeral and Support Fund or to the Sweet Home Funeral Chapel.

Neil Allen Nightingale, 39, of Sweet Home, Oregon passed away Friday. He was born in Corvallis to Gary Allen and Annette (Slek) Nightingale.

Neil attended Lacomb Elementary 1stâ€“8th grade (1983â€“1991) and Lebanon High School where he graduated in 1995 in the top ten percent. Neil was an active Cub and Boy Scout and earned his Eagle. He raced BMX bikes and rode three-wheelers with his family every weekend growing up. He raced and rode motocross in his teens through mid 20s at Albany Race Track. Neil loved the outdoors, camping, hunting and fishing, etc. His passions were his family and trucking. He most enjoyed his Friday trucking time with his co-pilot and son, Ryder Allen Nightingale, age 6.

Neil began his log truck driving career at age 19 (1996) for Nightingale Trucking, owned by his parents. His father, Gary, taught Neil how to take pride in maintaining a good looking truck, and Neil had one of the best kept log trucks on I-5. He worked alongside his father, then he began working for Ted Hufford with Timberline Logging November 1, 2004.

Neil moved to Sweet Home in September of 1999. He first met Tami in 2000 as a orthodontia patient at Wolthuis Family Dentistry where Tami was a dental assistant. They began their friendship seeing each other every month for adjustments until they began dating December 8, 2005. They were engaged June 2006 and married October 21, 2006. Neil chose the 21st because it was his “Lucky Number 21!” Neil was a wonderful daddy to Rye, and best friend, husband, and provider to his wife, Tami. She will greatly miss him with all her heart and soul.

Neil is survived by the love of his life, his wife Tami (Brown) Nightingale; six-year-old son Ryder Allen; 24-year-old stepdaughter Alyssa Logan-Orr and her husband, Keven Orr); his parents, Gary and Annette Nightingale, of Sweet Home; sisters Tara and her husband, Chris DiSante, of Lebanon and Tesia and her husband, Joby Oliver, of Redmond; father and mother-in-law Butch and Karen Brown; sister and brother-in-law Wendy and David Younger; two grandchildren; three nieces; three nephews; aunts, uncles, cousins; and his 12-year-old best friend (dog), Heineken â€śHeini”; along with many friends and other family members that loved him dearly. Neil will be missed â€śbeyond wordsâ€ť by his family.

He was preceded in death by his grandparents and uncle and best friend, James C. Nightingale.

The family would like to thank their friends and the community for the tremendous outpouring of love, support, and prayers.

A celebration of Neil’s life will be at 2:00 p.m., Friday, February 5, at Sweet Home High School Auditorium. In lieu of flowers, donations can be made in Neil’s name to Wells Fargo, GoFundMe Neil Nightingale Funeral and Support Fund or to the Sweet Home Funeral Chapel.