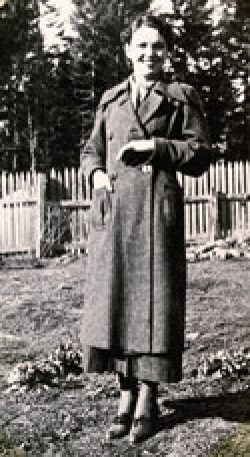 Her brother, Herschel, died before she was born. Shortly after Myrtle was born, William and his brother, Louis, came to Oregon and purchased acreage on what is now High Deck Road. In 1915, Metta Daisy brought two year old Myrtle by rail from Texas to Oregon to join the men on their farm. The family lived there until Myrtle was 21. Myrtle attended Sweet Home High School while boarding in the old Weddle House. She graduated in 1933.

Leslie Hufford and Myrtle were married April 20, 1935 in Albany. This marriage lasted until Leslie’s death 63 years later in 1998.

Tree farming was the business foundation of their family and Myrtle and Leslie were partners. They were Linn County Tree Farmers of the Year in 1958. After Leslie passed away, Myrtle continued tree farming with their daughters in four separate limited family partnerships on the home property.

Myrtle was a talented artist who was able to work in many mediums: oil, pastels, watercolors, ink, colored pencils, woodcarving, and clay sculpture. It seemed that any artistic endeavor she attempted she was able to accomplish. She and Leslie engineered farm outbuildings which Myrtle did much of the work on. Many of these stand to this day.

Early in their marriage Myrtle and Leslie built their first house of hand-split boards from two old growth fir trees lying on the site of their “new house.” The old house windows were created from auto glass, salvaged from a wrecking yard, set into hand-made window frames. In her late thirties, Myrtle and Leslie began building their “new house,” a ranch style house, of concrete and pumice stone. Myrtle transported pumice blocks from Madras, OR, on “Shakes and Rattles,” their old truck. She and Leslie learned to lay blocks.

Myrtle enjoyed vegetable, berry and flower gardening. Her flowers and fruit enriched many peoples’ lives. She had to defend her gardens from the deer until she and Leslie were able to construct a six foot fence around the home site.

She was a very generous matriarch. She enjoyed raising chickens, converting her and Les’ old home into a chicken condominium where she and granddaughters raised chickens to show at fairs. She would have the granddaughters come, they would purchase ingredients, and the girls would cook winning exotic dishes for 4-H competitions.

Myrtle was an avid outdoors woman, teaching and then competing with her grandsons in hunting exploits. She loved walking, out-walking the best, and she was a strong swimmer. She became a Girl Scout leader and a lifetime Girl Scout with her youngest daughter, realizing that the outdoors, artistic endeavors, camping and cooking skills developed through her years of outdoor living were of great value to all girls. “Girl Scouting taught me that I was worthwhile.” Myrtle related to one of her daughters.