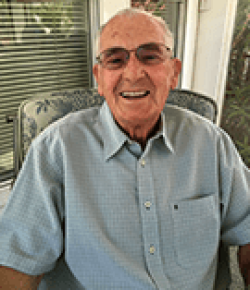 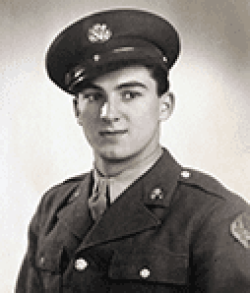 A memorial service with military honors will be at 11:00 am Saturday, September 28 at Fir Lawn Lutheran Church in Sweet Home.

In lieu of flowers, donations may be made to: The Casey “KC” Hanscam Memorial Fund (SHAF – P.O. Box 83, Sweet Home, OR 97386, Evergreen Hospice or any charity of your choosing.

Mervin L. Hanscam was born on July 31st 1924 and died on September 19, 2019 at the age of 95. His parents were Elmer E. and Viola E. (Anderson) Hanscam. He was the youngest child of two daughters and four boys. Mervin was born in Fort Dick, CA but when he was three months old his parents moved the family to Brookings-Harbor, Oregon where his parents purchased a General Merchandise Store. He grew up working in the store, except to go to school and play sports.

Mervin graduated from Brookings High School in 1942. He was a good student and received an appointment to the Naval Academy. He loved sports and was captain of the basketball team for three years. In track, he ran the dashes and hurdles.

He started college at the University of Oregon but on December 8th 1942 (the year after Pearl Harbor), Mervin enlisted in the Army Special Training Program. ASTP was designed to send college students to basic training and then back to college to become officers. He entered service at Fort Lewis, then was sent to South Carolina for basic training and became a squad leader.

With basic training over, he was sent to Georgetown University in Washington D.C. to study engineering. After two terms, the army decided they needed troops in the infantry, rather than officers, and terminated the ASTP program. Mervin was sent to the 102nd Infantry Division and became a Browning Automatic Rifleman (BAR).

The 102nd Division was sent to Europe, where they entered into combat at the German border as the Northern American Division joined with the British Army. With heavy casualties, having his squad twice being reduced to three men, he managed a transfer to a Military Policy (MP) outfit. His five man platoon was used to evacuate POW’s from the front lines. A highlight came on the Elbe River, watching the Russians take Berlin when his five man platoon was given five German Generals and an aide to guard. After VE day, all MP units were combined into one platoon and Mervin took command of 56 MP’s. For his service, Mervin was awarded the Bronze Star Medal.

After being discharged, Mervin went back to the University of Oregon to study accounting. Not wanting to be a B.A.R. Man, in case of another war, he joined the Air Force ROTC. He was made Squadron Commander and upon graduation, received a commission in the Air Force Reserve.

Graduating in 1950, he started his career with the State of Oregon Division of Audits. Tiring of constant travel, Mervin returned to Eugene and worked for two different accounting firms. In 1952 he purchased the CPA practice in Sweet Home Oregon where he continued until he retired in 1990 and then sold his practice to his son Steven. Mervin was a charter member of the Sweet Home Elks Lodge, a 40-year member of the Rotary Club, a member of the VFW, and the American Legion. He was Sweet Home First Citizen in 2009.

In 1950 he married Dorothy J. Duncan, a marriage lasting 50 years. Together they had three chldren, Christine, Steven, and Suzanne. In 2001 Mervin married Alice Fleming Hyland and received a wonderful second family.

Mervin loved life, camping, water sking on Foster Lake, Green Peter, and Shasta Lake, salmon fishing and crabbing, hunting and golfing. Along with RVing to Alaska, he enjoyed spending winters in Baja, CA, around Oregon and beyond. In 2002, Alice and Mervin purchased a park model in a golf resort in Desert Hot Springs and became snowbirds.

A memorial service with military honors will be at 11:00 am Saturday, September 28 at Fir Lawn Lutheran Church in Sweet Home.

In lieu of flowers, donations may be made to: The Casey “KC” Hanscam Memorial Fund (SHAF – P.O. Box 83, Sweet Home, OR 97386, Evergreen Hospice or any charity of your choosing.