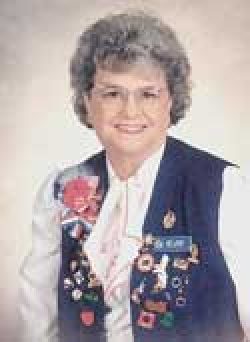 In lieu of flowers, donations can be made to the Alzheimer’s Association, www.alz.org, in honor of Mary Jane Hodge-Guengerich.

Mary Jane served our Lord through her work with the Sun City West Baptist Church in Sun City West, AZ and 49 years of teaching Sunday School and other church organizations at the EUB Church in Foster, OR. She was also a lifetime member of the Eastern Star, where she served as Worthy Matron multiple times. She also served The American Legion and the Woman’s Auxiliary of the VFW in the Sweet Home, OR chapters. She volunteered at the voting booth. Mary Jane retired as Post Master after 23 years working at the Foster Post Office. She also kept books for her husband’s log truck business. After she retired, she continued working at Cornets in Lebanon and in Goodyear, AZ, and Bob’s Variety Store in Sun City West, AZ.

Mary Jane lived on Wiley Creek for fifty years and moved to Arizona in 1994 to be closer to family. In 1995, Mary Jane married Delmar P. Guengerich of Sun City, AZ, where they lived until December 2009 when Mary Jane became ill and required extensive care. For the last three years, Mary Jane lived in the Avondale Assisted Living Home, were she passed quietly at the age of 87 to join Robert on his birthday.

Mary Jane was a strong-willed, warm, and loving woman that gave anyone she met a smile and friendly conversation. Her physical presence will be truly missed by all who knew and loved her, but her memory and spirit will live on.

In lieu of flowers, donations can be made to the Alzheimer’s Association, www.alz.org, in honor of Mary Jane Hodge-Guengerich.