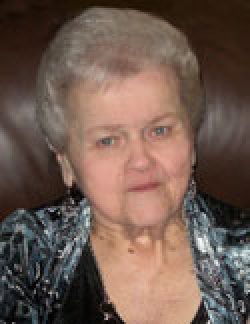 Memorial service will take place at 11:00 a.m., Saturday, February 2, 2013 at Sweet Home Funeral Chapel. Her ashes will be placed at the Mausoleum at Willamette Memorial Park in Albany.

Marlys Graham, 80, of Sweet Home passed away Tuesday surrounded by her family. She was born in Toronto, South Dakota to Carl and Cora E. (Rolfson) Exe.

Her mother moved to Portland with her children to work in the shipyards after her husband Carl passed away at a young age. Marlys spent her teen years in Salem and met the love of her life at a dance hall in Oakridge. She was courted by Ray Graham and they later married on October 29, 1950.

After three years of marriage, they started their family. They were blessed with two sons and one daughter. They settled in Sweet Home in 1963 and started to build a mobile home park, Trailer Villa. They owned and operated the park for the next 34 years. Upon retiring, they traveled extensively and had many great experiences and created a lot of wonderful memories.

She was a very kind, warm-hearted woman. She was very distinguished and beautiful. She always wanted to be fair and equal with her children. She loved being a wife, mother, and grandmother.

She was preceded in death by: her mother, Cora; sisters, Dorothy and Bersadis; and her son, Gary Graham.

Memorial service will take place at 11:00 a.m., Saturday, February 2, 2013 at Sweet Home Funeral Chapel. Her ashes will be placed at the Mausoleum at Willamette Memorial Park in Albany.