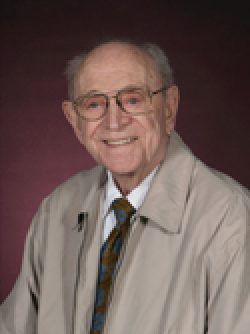 Lyle D. Warren, 92, of Sweet Home, Oregon passed away Wednesday. He was born in Nyssa to Marvin Haley and Jessie Mae (Sherrife) Warren.

He lived in Sisters as a young boy and moved to Corvallis at the age of 12. He graduated from Corvallis High School in 1938 and attended Oregon State College. From 1940 to 1942, Lyle worked as a surveyor with the Engineering Branch of the United States Army out of Camp Adair. From 1942 to 1945, he served in the U.S. Army Air Force as an Aerial Gunnery Instructor. He achieved the rank of Sergeant and logged many hours in B17 and B24 bombers. After his military service, he went on to earn a Bachelor of Science degree in Civil Engineering from Oregon State College, graduating in 1947.

He became a Registered Professional Engineer in 1949 and eventually was a licensed professional engineer in many states. He started his career in the woods products industry working for Weyerhaeuser in Springfield and Everett, Washington. He moved to Sweet Home in 1953 and worked for Willamette National in Foster. In 1962, he formed his own engineering firm, L.D. Warren and Associates, which later became Warren and Brewster Company, and is now Maxi Mill Inc. of Albany. He designed and built many modern computerized sawmills across the United States and British Columbia.

Lyle enjoyed hunting, fishing, boating, camping, rock hunting, and ATV rides on the Oregon coast. In 1941, Lyle earned his private pilot license. Before he retired he often flew for business and pleasure and eventually had instrument and multi-engine ratings.

Lyle Warren and Josephine Copeland met a dance in Rickreall and were married July 5, 1941 at St. Edward’s Catholic Church in Lebanon. They recently celebrated their 73rd wedding anniversary.

The family wishes to extend their gratitude to Avamere Lebanon Rehabilitation for the care Lyle received.