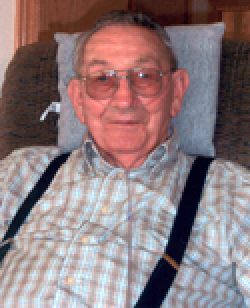 Memorial service will be 2:00 PM Thursday at the Point Restaurant at 6305 Main Street, Sweet Home.

Loren Burrell, age 86, of Sweet Home passed away Sunday, December 13. He was born in Lebanon, Oregon to Lin and Velma (Rose) Burrell.

Loren was raised in Sweet Home. After high school, he joined the Army and served in WWII in Italy. After the war, he worked in the timber industry and lived in various places along the west coast. In 1963, he settled in Petersburg, Alaska, where he and his wife raised their four children. He returned to live in Sweet Home in 2004.

After his retirement in 1985, Loren spent the summer months fishing and spending time with family and friends in Alaska. When the geese began flying south, he packed his bags and followed them where he spent his winters catching up with friends and family along the west coast. He enjoyed playing slot machines and watching sports.

Wherever he hung his hat he considered it home.

He was preceded in death by his wife Doris, and brothers Jack and Warren Burrell.

Memorial service will be 2:00 PM Thursday at the Point Restaurant at 6305 Main Street, Sweet Home.