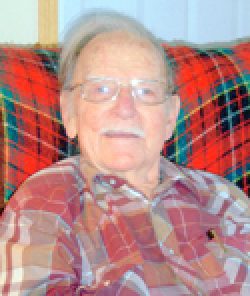 Lee Marvin McBride, 95, of Lebanon passed away Monday. He was born in Claude, Texas to Lee and Gertrude McBride. Lee moved with his family to Delta, Colorado in 1935 where he met and married Hannah Josephine Bruton on June 19, 1937. They enjoyed 60 years of adventures as husband, wife and best friends until her death on October 19, 1997.

They left Colorado for Tulelake, California in 1940 and eventually settled in Klamath Falls, Oregon where they lived until moving to Lebanon, Oregon in 1993. Lee worked as an auto mechanic, a sawyer and handyman in sawmills, a delivery man for Sears, Roebuck & Co., and a maintenance employee for the Klamath County School District.

His most enjoyable work, however, was creating and building with wood. He built and sold several homes then directed his creative efforts to smaller projects completed in the wood shop at his home. He continued this hobby in Lebanon and left to his family home-made bedroom sets, cedar chest, lamps and sewing tables.

“L.M. and Jo” shared a love of horses and, following retirement, they spent many days camping and riding in the Crater Lake area and from a campground in LaPine, Oregon. He was known fondly, as “the Cowboy” by staff and fellow residents as Wiley Creek Assisted Living where he lived in the months just preceding his death.

Lee left to his children and grandchildren the inheritance of a life well lived with love of family and friends, with integrity and courage, with a sense of humor and with the peace of a well earned rest at the end of a day’s honest labor. As he looked back on his long life he saw clearly the hand of God leading him at the many junctures and turns he had taken.