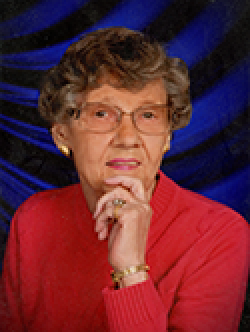 LaVern Frances Hay, 81, of Sweet Home, Oregon passed away Thursday, January 11, at Avamere Rehabilitation in Lebanon. She was born in Aurora, Nebraska to Roy Edgar and Marguerite Angeline (Eaton) Daniels. She was the youngest child in her family, joining her sister, Grace, and her brother, Derrel, whom everyone knew as Jerry.

LaVern spent the majority of her school years in Alma, Nebraska. At the age of four, LaVern was tested to see if she was ready to start school. She had absolutely no problem passing the test, and so began her schooling. She was a bright student always earning good grades. Just before her junior year of high school, LaVern and her family moved from Alma to Trenton, Nebraska. She completed her last two years of high school there, graduating at the age of sixteen.

During her senior year of high school while cheerleading at a basketball game, LaVern caught the eye of a handsome, young fellow who had just returned from serving in the Army in the Korean War. He had decided to attend a high school basketball game at his alma mater, but instead of watching the game, he found himself more interested in the beautiful brunette cheerleader than the action on the court. He just had to meet that gorgeous girl! They hit it off, began dating, and ten days after graduating, she married that young man—John Neil Hay, on May 29, 1953. They were just three months shy of their 60th wedding anniversary when John passed away on February 26, 2013.

It wasn’t long after marrying that they started their large family. By the time LaVern was 23, she and John had five children—four boys and one girl. All were born in different states except two. During the early years of their marriage, John often had to work away from home, leaving LaVern alone with all those children. She was a remarkable wife and mother in the way that she was able to take care of all those kids, tend to their every need, and manage the house, while John was away working hard to provide for her and their family. After living in Nebraska, South Dakota, New York, Arizona, and California, they made the move to Sweet Home in the summer of 1965. It was here that they finally settled down to raise their family and never moved again. It was in 1970, when they would have their last child, another son, making a grand total of six kids.

On September 6, 1977, when the youngest child entered second grade and only the youngest of the first five kids was left at home, LaVern was offered a job as a playground aide and lunch server at Hawthorne School. It wasn’t long before she found her way to the library at Hawthorne where she would become the school’s Library Paraprofessional. It was the perfect job for LaVern, as she had always been a lover of books. In her spare time, it wasn’t uncommon to find LaVern with her eyes glued to the pages of a book she just couldn’t put down. At Hawthorne, LaVern wasn’t just the “Library Lady.” She not only helped students find books they were truly interested in, but also was there just for them to talk to. They knew she cared about them. Those kids loved her and so did the staff. Staff members knew that they could always go to LaVern, and she would have suggestions for books and other resources they could use with their classes to enrich their lessons. After twenty-four wonderful years at Hawthorne, LaVern retired on June 22, 2001.

After retirement, LaVern spent a great deal of her time at St. Helen Catholic Church attending daily mass, volunteering her time there and supporting various causes important to her and the church.

LaVern’s hobbies included reading, tending to her roses and other flowers, her nightly routine of watching Jeopardy and Wheel of Fortune, and spending time with her family. She loved the big family gatherings that included all of her children, their spouses, grandchildren, and great-grandchildren. For LaVern, her relationship with God and her family were the two most important things in her life.