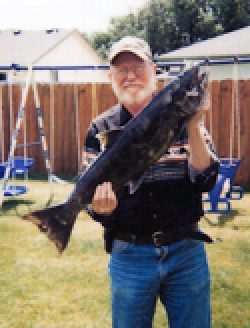 Memorial service will be at noon Saturday, January 23, at the First Assembly of God Church in Lebanon. Memorial contributions may be made to the Larry Collman Memorial Fund at OSU Federal Credit Union.

Larry Ernest Collman, age 69, of Dayville and Lebanon died Friday, January 15, 2010 at his residence in Dayville. Larry was born September 24, 1940 in Klamath Falls, Oregon to Ernest and Alice (Robertson) Collman.

Larry attended and graduated from high school in Klamath Falls. He served in the US Marine Corps from 1957 to 1961.

Following the service, Larry went on to college: ITT to earn a degree in mechanical engineering; LBCC for a degree in metallurgy; and a vocational welding school. Larry worked as a machinist and welder for Lebanon Machine until he retired in 1990.

Larry loved the outdoors. He spent his free time hunting, prospecting, fishing, and camping. His favorite hobby was spending time with his grandchildren in Lebanon. He spent everyday helping to care for his grandchildren. He enjoyed helping with homework after school. He took the kids for walks with a red wagon in tow and soon after he would be joined by all the neighborhood kids. He loved helping build forts in the field behind the house and picking blackberries. You could always find him as a spectator at his grandchildren’s sporting events. He was known as “Daddy Grandpa” by many of the children in the community. Larry also enjoyed researching family genealogy with his cousin, Joan Reed from Mt. Vernon. Larry was an avid reader and spent time drawing pictures.

One of Larry’s accomplishments was winning a rifle for the best marksman while in the Marine Corps. Also, one of his engineering blueprints was so perfect that is was displayed for years on the wall at ITT. He was a brilliant inventor who was always finding a more efficient way of getting a job done.

Larry was preceded in death by his son, Matthew Collman; parents, Ernest and Alice Collman; and a brother, Arlan Collman.

Memorial service will be at noon Saturday, January 23, at the First Assembly of God Church in Lebanon. Memorial contributions may be made to the Larry Collman Memorial Fund at OSU Federal Credit Union.