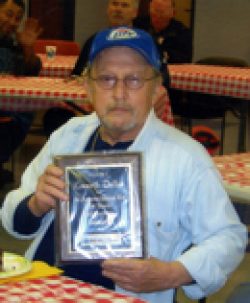 Kenneth Eugene Dolbin, 65, of Sweet Home passed away Sunday, December 4, 2011. He was born in Harrisburg, Pennsylvania to Richard and Lorraine Jane (Dawson) Dolbin.

He was raised in Harrisburg, Pennsylvania and came to Oregon in 1966. He moved to Sweet Home in 1996.

Kenneth served in the United States Navy Fighter Squadron 143 from June 28, 1963 to June 27, 1969 when he was Honorably discharged. While serving, he received the Vietnam Service Medal with two stars, Republic Vietnam Campaign Medal, National Defense Service Medal, and the Navy Unit Commendation Ribbon.

He was a journeyman maintenance Mill Wright. He retired from Oremet in 2010. He loved hunting, fishing, and target shooting.

He was preceded in death by: his mother, Lorraine Jane Dolbin in 1983; father, Richard Albert Dolbin in 1998; and brother, Douglas Richard Dolbin in 1989.