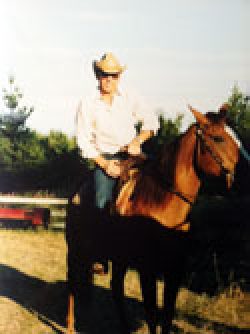 A viewing will be held at 9:00 a.m., Saturday, October 15, in Guerber Hall at the Benton County Fairgrounds in Corvallis (driving directions). Funeral service will follow at 10:00 a.m.

Keith was born in Alliance, Nebraska to Willis and Pacia (Brenaman) Pyle.

In 1936, the family gave up their farm and moved to Corvallis via Salem. He graduated from Corvallis High School in 1938, and then studied at Oregon State University.

During World War II, Keith went to Los Angeles to work for Douglas Aircraft where he met his future bride, Dorothy Louise Davis. They were married in 1946 in California.

Industrious as he was, Keith built a home in Corvallis on 9th Street and bought D&B Motors from his father, Willis Pyle. He owned and operated it until 1975 when he sold the business and “retired.”

He continued to be active, both in the Benton County Sheriff’s Posse and the Lions Club. He served various roles for them and was notoriously known as the ‘tail twister.’ He led a very full life, riding horses and managing his properties.

Like everything Keith Pyle did, he consciously chose the time of his death, and accepted it gracefully. He died with his loving family at his side, cracking jokes and telling stories till the very end.

A viewing will be held at 9:00 a.m., Saturday, October 15, in Guerber Hall at the Benton County Fairgrounds in Corvallis (driving directions). Funeral service will follow at 10:00 a.m.