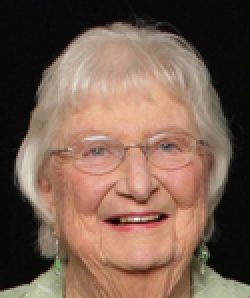 Kathleen Ellen Carolan, 87, of Lebanon passed away peacefully with all of her family at her bedside on Thursday in Lebanon, Oregon.

Kathleen was born in Los Angeles, California to Patrick and Mabel (Butts) Shepard.

She graduated from Grants Pass High School in 1941, before moving to Portland, Oregon to begin secretarial work, with advancements in the lumber industry. During World War II, Kathleen served her country with the production of war planes, joining the ranks as a Rosie the Riveter.

Kathleen met her husband, Robert Emmett Carolan, while going to high school in Grants Pass. They later married in New York on January 1, 1951. Together, they had three wonderful children: John Patrick, born in 1952; Molly Ann, born in 1954; and Michael Emmett, born in 1956. Emmett and Kathleen enjoyed many years of happiness together with their children traveling and camping, and singing all the while. They worked hard together, opening the first preschool in the Salem, Oregon area. They later moved to the San Jose, California area, where they owned and operated a construction company for many years.

She was actively involved in her community, including being a den mother for the Cub Scouts, Campfire Girls leader, member of the Ming Quong Guild, and PTA president of her childrens’ school.

Kathleen and Emmett spent their golden years in Sweet Home enjoying their family. Through the years, her many activities and hobbies included painting, square dancing, family games, sing-a-longs, and annual holiday gatherings. Kathleen was a very spiritual person and was actively involved in her church through all her years.

Kathleen was preceded in death by: her loving husband, Robert Emmett in 1997; brother, Terry Shepard in 1988; and sister, Patricia Toole in 2005.