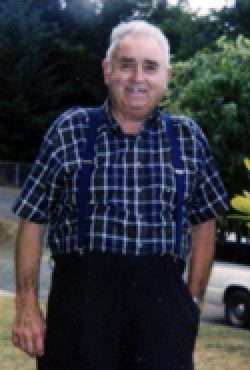 A memorial service will be at 4:00 p.m., Tuesday, May 20, at Sweet Home Evangelical Church.

K. Blair Smith, 88, of Sweet Home, Oregon died Saturday, May 10, 2014. He was born in Sweet Home to Everett V. and Louise M. (Geil) Smith. He was delivered at the family home on Pleasant Valley Road by a doctor who traveled to Sweet Home from Lebanon in a horse-drawn buggy.

He was Senior Class President at Sweet Home High School, but left during the middle of that senior year to work as a logger to help support family while his older brother “Bud” fought in the war overseas. He completed graduation requirements shortly after his two years in the Navy.

Blair served in the United States Navy as a Coxwain. He served on a ship that re-supplied fighting vessels in the South Pacific Ocean with food and ammunition during the end of World War II. He was Honorably Discharged. Blair never fired a shot at the enemy from the small canon he manned.

He lived in Sweet Home his entire life except for six months when he lived in Bandon and his time in the Navy.

Blair worked in logging until 1960 working at Geils Mill on 18th for about six months. During his time in the timber industry, he served as foreman and superintendent. He then managed the Sweet Home Cemetery District from 1961 to 1988 when he retired.

Blair hunted and fished his entire life. He even hunted last year in 2013. He last fished in 2012, but he never caught an Oregon Steelhead. He died just five days before being able to use his new card and welcome Bi-Mart to his beloved Sweet Home.

He and his wife Beaulah “Ditty” had five sons and two daughters. He made sure his kids learned to love the Lord and learn the Bible at the Sweet Home Evangelical Church. He supported his boys in football, basketball, baseball, and wrestling through Sweet Home Husky programs with district and state honors. Blair was a four sport Husky Letterman himself.

A memorial service will be at 4:00 p.m., Tuesday, May 20, at Sweet Home Evangelical Church.