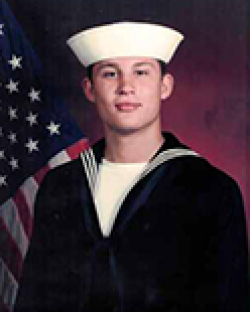 Justin will have a private interment with family at Twin Oaks Memorial Garden in Albany. In lieu of flowers, bring food to the memorial or donate to the Albany Soup Kitchen in Justin’s name.

Justin Dean Sitton, 46, of Albany, Oregon was found drowned in Albany in the Willamette River on August 21, 2018.

Justin was born in Albany and attended West Albany High School and Lebanon High School. Justin served in the Navy as a Seaman during the Gulf War and later reenlisted in the Army as a medic.

Justin loved music! After being exposed to punk and ska music while serving in the Army, Justin’s love of music was influential to his family! Justin was full of charisma and everyone liked him.

When Justin was 23 years old, he was in a tragic auto accident that doctors said he wouldn’t survive. But he did! He lived another 23 years with a Traumatic Brain Injury. He had to learn to walk, talk, eat, swallow, money, counting, calendar…just about every life skill he had to relearn. Justin had a strong constitution to relearn these hard skills as some of them were very difficult, such as walking again.

After a year of intensive recovery, Justin’s executive functioning had changed. He worked hard at gaining his charisma and sense of humor back. He relied on humor to get him through the toughest times. Over time, Justin’s montra was “positivity begets positivity.” He was positive and friendly to everyone he met! He made a lot of friends this way. But still Justin continued to have difficulties, some only he knew, some he shared only with close family. He tried to be the best person he could be without complaining. He made the best of his life that he could.

Justin attended LBCC for two years and volunteered at the Albany Soup Kitchen for many years.

Justin’s biggest loves were his children!

Preceding him in death are his brother, Spencer Biegel, grandparents, Jeannette and Jim Palmer and Helen and Gene Sitton.

Justinwent missing before being found. We would like to thank everyone who helped to search for him, especially the Albany Police Dept, who were so helpful and genuinely caring for Justin and his family during this tragic time.

Justin will have a private interment with family at Twin Oaks Memorial Garden in Albany. In lieu of flowers, bring food to the memorial or donate to the Albany Soup Kitchen in Justin’s name.