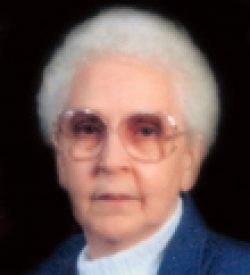 She met and later married Eugene Patterson in 1947, while living in Iowa. Eugene later enlisted in the United States Marine Corps during the beginning of the Korean War. He later sent for June, which eventually brought them both to California. Gene worked in automotive industry after being discharged from the service.

In 1968 the couple relocated to Sweet Home, Oregon and worked together at their own automotive paint shop until Gene had to retire due to his health. June found work with Hill Timber, working in their offices until retiring herself in 1990.

June was a member of the Sweet Home Evangelical Church. She was quite active in the local women’s group.

June is survived by her husband, Eugene “Gene” Patterson of Sweet Home; nieces and nephews; and her church family. She was preceded in death by her three sisters and parents.