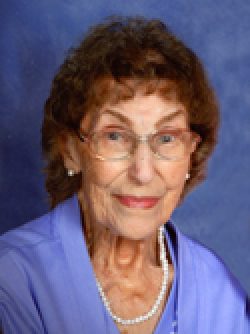 Josephine Carolyn Warren, 92, of Sweet Home,Oregon passed away Tuesday, October 13. She was born in Grand Ronde to Joseph H. Copeland and Alvina A. (Parker) Copeland.

Her youth was spent in Grand Ronde, Dolph (Hebo), Tillamook, and Sweet Home. She graduated from Sweet Home High School in 1941. She met her future husband, Lyle. D. Warren at a dance in Rickreall, Oregon. Josephine and Lyle were married at St. Edwards Catholic Church in Lebanon, Oregon on July 5, 1941. They were married for 73 years until Lyle’s death on September 17, 2014. During their early marriage and Lyle’s World War II service, Josephine lived in Corvallis. After the war and her husband’s graduation from Oregon State College, they lived in Springfield, Coos Bay, and Everett, before settling in Sweet Home in 1953.

She enjoyed hunting, fishing, boating, flying, camping, rock hunting, and ATV riding with her husband. She caught many salmon fishing out of Newport aboard her namesake boat “Josephine.” She collected antiques and in her younger years decorated cakes. In later years, she liked to read, play scrabble, and put together jigsaw puzzles. Over the years, she enjoyed her many dogs and also her last companion, Daisy Cat. Most of all, she enjoyed her family. Each year she held a Thanksgiving dinner where everyone in the family and their friends were welcomed. She also hosted large family gatherings on Christmas, May Day, her anniversary, and Lyle’s birthday.

Josephine was a proud member of the Confederated Tribes of the Grand Ronde. She was an original member of St. Helens Catholic Church in Sweet Home.

Josephine is preceded in death by her husband, Lyle; father, Joseph, and mother, Alvina; sister, Veronica Mollenhour; and grandsons, Anthony and Andrew Harry.

The family wishes to extend their gratitude to Albany Samaritan Hospital and Visiting Angels, especially Rosemary and Ann, for the care Josephine received.