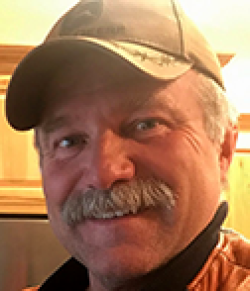 Joseph Randall Couch, Jr., of Sweet Home, Oregon passed away Wednesday, July 18. Joe was born to Joseph Randall Couch, Sr., and Myrna Susan (Delozier) Couch in Kansas City, Kansas. Joe was the oldest of three boys with younger brothers Ron and Kelly. The family lived in Kansas, Tennessee, and Michigan before moving to Oregon in 1967.

Joe enjoyed hunting, fishing, and the outdoors at a young age. Hunting was something the entire family enjoyed and did together. Joe learned at a young age that family always came first and modeled his life with that in mind. Joe graduated from David Douglas High School in 1976 and, soon after, started his career in the elevator industry.

Joe’s family started with the birth of his daughter, Rebecca Susan Couch, followed by his son, Travis Joe Couch.The family settled in Molalla. Later, Joe’s family grew when he met the love of his life, Susan, whom he married and gained daughters Jessica Marie Coats and Samantha Rene Coats.

Joe and Susan chose to make Sweet Home their forever home in 2012. What home meant to Joe was a place everyone was welcome and considered family. Joe never met a stranger. His beautiful smile was the first thing you saw and is the thing we will all miss the most.