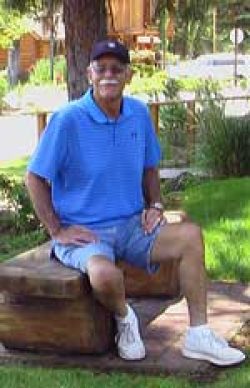 A memorial service will be at 11:00 am Sunday, November 11, 2012 at the Sweet Home Seventh-day Adventist Church. In lieu of flowers, the family is requesting that donations be made to the Alpha-1 Foundation (http://alpha-1foundation.org) or 877-228-7321.

Jon T. Sportsman,61, of Sweet Home, passed away Thursday due to a long battle with Alpha-1 Antitrypsin Deficiency Syndrome. He was born in Westfir, OR to Warren C. and Juanita M. (Parker) Sportsman.

Jon was raised in Winston, OR. He moved to Ketchikan, Alaska in 1971 where he spent the majority of his working career in the timber industry. On December 27, 1979, Jon married his wife, Tawny. After retiring in 2002 from the timber industry, they moved to Sweet Home, OR. Following his retirement, Jon worked for Specialty Crushing in San Francisco, CA, owned by his friend, Tom Chasm, until 2006 when he had to retire once again due to his health.

In 1995, when his health was at a critical crossroad, Jon received a second chance at life. After being placed on the transplant list, he temporarily moved to Tualatin, OR with Tawny and Katie to await the call. It came on June 21, 1995 and he received a lung transplant at OHSU in Portland, OR. His family will be eternally grateful for the gift of life given by his donor Jeff Lockhart and his parent’s, Dick and Elaine.

Jon loved the great Alaskan outdoors and spent much of his time fishing, hunting, camping, and exploring the Alaskan wilderness. There was nothing he loved better than to pull out a map and say “Let’s go HERE.” After his lung transplant he purchased a 32’ Bayliner, which he named the “Second Wind.” He never wasted a moment of the gift of life he had received.

Jon loved to travel whether on foot or by boat, plane, helicopter, car, or motorcycle. He loved to experience new places, cultures, people and of course, he loved the food everywhere he went. His work often took him to the Orient which was his overall favorite, but every trip held some magic for Jon.

After Jon and Tawny moved to Oregon, Jon sold his boat and purchased a 2002 Harley-Davidson Softail Heritage Classic. He loved to ride all the back roads of Oregon and California and logged over 10,000 miles visiting Arizona, Idaho, Montana, Nevada, Yellowstone National Park and more. Jon often traveled with his friends Don Kimball, Stan Timperley, Mike Diggles, Tom Chasm, Chuck Balkwell, Jack Haroun, Eric Walker, Grant Timperley and Bob McCallister (aka “The Backroad Riders”). His favorite backseat companion was his wife Tawny. When he was no longer able to ride his Harley, he sold his bike and purchased a BMW Z3M. He and Tawny logged many hours driving in the Beamer and their favorite pastime was visiting Sisters, OR and surrounding areas.

Jon’s three children, ten grandchildren, and two godchildren were his greatest joy. Time spent with family and friends was the thing he enjoyed most. He was an active participant in the Sweet Home Seventh-day Adventist Church where he was available to assist with the audio, visual and computer systems and most anything he could help out with. His church family greatly appreciated and highly respected him.

As Jon journeyed through life, he always made the most of every opportunity God placed before him. Whether he was traveling around the world, fishing in the great Alaskan wilderness, riding his Harley or exploring new places in the Beamer he always had his eye on his next destination.

At last he’s made his final cruise and awaits the sound of the trump. He invites you now, to meet him there. Until then, he will be greatly missed.

A memorial service will be at 11:00 am Sunday, November 11, 2012 at the Sweet Home Seventh-day Adventist Church. In lieu of flowers, the family is requesting that donations be made to the Alpha-1 Foundation (http://alpha-1foundation.org) or 877-228-7321.