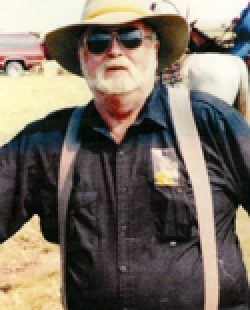 John Thomas Turner passed away at the age of 81 after a short illness. He was born in Alva, Oklahoma to John Thomas and Lola (Lockwood) Turner. His father died when he was a year old. His mother married Fred J. Smith when John was six.

John married Ruth Arlene “Rae” Harding on November 24, 1950 and he always referred to her as “the love of my life.”

He was inducted into the U.S. Army in 1950 and served in Korea with the 45th Division in communications. This began his life-long interest in radio communications.

After his service in the Army, he moved to Oregon where he became a police officer in the Springfield Police Department. Later, he relocated to Seattle where he dealt with farm equipment. In 1980, John moved back to Oklahoma to be near family. In Lamont, Oklahoma he opened and ran The Landmark Cafe. Their son and and daughter joined them there.

When his wife, Rae, passed away after a long illness, John moved to Enid where he and his son, Alan, opened the Hearthstone BBQ. The Hearthstone was a favorite of many celebrities who came to Oklahoma for the Annual Grand National Quail Hunt. John’s expertise in BBQ led him to his appointment as camp cook during the Pioneer Days cattle drive along the Chisholm Trail’s 100th Anniversary Commemoration of the Cherokee Strip. During the drive, he wore a horsehair coat made by his father from one of the horses used to pull his wagon in the Cherokee Strip. In 2004, he moved to California before returning to Oregon to live with his daughter Deborah and family.

He was a member and trustee of the Enid Amateur Radio Club and served as Section Emergency Coordinator for the Oklahoma ARES (Amateur Radio Emergency Service). He devoted many hours to both. His other love was motorcycles and he was known for riding around Enid on his Honda Gold Wing.

John was a friend to everyone and devoted many hours to helping people and always had a good story to tell. He will be greatly missed by many friends and family.

John was intensely proud of his children and grandchildren. His daughter, Deborah, an R.N., worked as a Patient Care Coordinator at Hospice Circle of Love in Enid, and then as manager of a Hospice in California. His son, Alan, is Corporate Chef/Culinary Manager for AB Foods. His grandson, Brian, holds two college degrees and is working towards his masters education. His granddaughter, Amilie, served in the U.S. Coast Guard and as Mommy to his only great grandchild. His grandson and brother in arms, Ian, is a two-time combat veteran currently serving in the United States Army. He spoke often of their accomplishments and never failed to tell them how much he loved them.