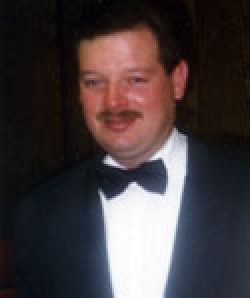 John Elwin Gourley, 55, of Foster, Oregon passed away Thursday. He was born in Lebanon to Jack Elwin and Betty Beatrice (Taylor) Gourley.

John attended schools in Cascadia, Foster, and Sweet Home and graduated from Sweet Home High School. He continued his education and earned a Bachelor of Science Degree at Oregon State University.

John lived most of his life in the Foster area, and also lived in: Fallon and Winnemucca, Nevada; Forks and Marysville, Washington; and Joseph, Albany and Salem, Oregon.

After high school, John worked for his parents at G-2 Electric building, installing, and computerizing lumber mills in the Willamette Valley, Eastern Oregon, and Eastern Washington. He worked as a millwright at Willamette Industries Foster Division and an electrician at TOMCO in Cascadia. For a couple years, he was in charge of keeping the Falls Creek water turbine power plant above Cascadia running. John was an electrical engineer at Naval Air Station Fallon in Nevada, and also at Nellis Air Force Base in Las Vegas. He designed a fuel-efficient car and had patents on his design. John was offered a professorship at OSU to teach classes about his fuel saving car.

John enjoyed working with youth and was a Scoutmaster many years for Troop 395. He also led training at many District Roundtables and Wood Badge events. He received the Calapooia District Award of Merit and the Scoutmaster Presidential Award. John was a member of the Church of Jesus Christ of Latter-day Saints. He served a mission and in many auxiliaries of the church.

He enjoyed being outdoors, hunting and fishing, boating, and making intricate models of cars and jets. He also loved cooking, traveling and being at the coast.

John was very proud of his children and loved each of them unconditionally.