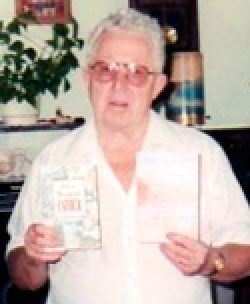 Funeral service will be at 1:00 p.m., Tuesday, December 29, at Sweet Home Evangelical Church. Burial will follow at Gilliland Cemetery

John Albion McGlothern, age 85, of Eugene (formerly of Sweet Home) died on Wednesday at his home. He was born in Seattle, Washington to John F. and Ida (Erskine) McGlothern. He came to Sweet Home in the late 1920s.

John served in the Navy in WWII. He returned to Sweet Home where he owned and operated a lumber mill. John and his brother helped in the construction of the Sanctuary of the Sweet Home Evangelical Church.

John moved to Eugene in the 1960s where he continued to work in the lumber industry. John spent the last six years in the loving care of daughter, Beverly.

John was a rockhound and had a rock shop. He was always looking for thunder eggs and petrified wood. He enjoyed outdoors, spending his time camping and fishing.

Funeral service will be at 1:00 p.m., Tuesday, December 29, at Sweet Home Evangelical Church. Burial will follow at Gilliland Cemetery.