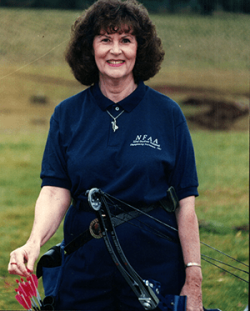 The family invites those who knew Jo to her service at Sweet Home Community Chapel at 3:00 p.m., on Saturday, March 18th.

Archers – Please plan to bring your bow and a signed arrow to shoot at the target we will have in Jo’s honor.

If you would have asked Jo McCubbins what the crowning achievement of her life was, she would have said her family—her four children, Frank, Susie, Danny and Melissa, her eight grandsons, and eleven great-grandchildren. But the word ‘housewife’ falls far short of describing her lifetime contribution to the world. After she married Frank McCubbins in 1950, at the age of 16, the next 65 years of her life were devoted to supporting him and helping him in whatever he did. As newlyweds, they owned and operated a large dog kennel and horse boarding stable on Harbor Blvd in Santa Anna, California. Jo’s specialty was grooming the dogs, especially poodles, at “Josie’s Poodle Parlor” where she even dyed the white poodles into beautiful pastel colors, which became very popular.

Like her husband, she was fun-loving and adventure-seeking. They were eager to go new places and try new things. When their children were born, they created wonderful memories as a family.

Around 1955, Frank and Jo began shooting archery. Both Jo and Frank picked up the sport quickly, but Jo seemed to be a natural and caught the eye of a champion and coach. He asked Jo if she would like to begin training with him and compete at the California State Field Championships. Jo was flattered, and being a modest but fierce competitor, said she’d love to. This began a 60-year championship archery career for her leading to 55 state, sectional, national and world championships. She was an amazing shooter, but also young and beautiful, which made her popular with the press. She received invitations to be on magazine covers and even to be flown to New York to be on the game show To Tell The Truth and also a guest on The Tonight Show. She was not only a champion herself, but coached her children and grandchildren to over 320 state, sectional, national, and world championships. The NFAA archery records books are full of the family name because of her amazing ability to build archery champions. Her enthusiasm and coaching was not limited to her family, but shared with anyone who wanted her help. In the archery world, many goals were reached and many championships won because of Jo McCubbins. Because of this fact, and her many personal triumphs, in 1998, she was inducted into the National Field Archery Hall of Fame.

Jo’s accomplishments and service to others was not just in the sport of archery. She was also an art teacher, choir leader, artist, athlete, horsewoman, sports fan, traveler, and Sunday school teacher. Her crafting abilities seemed unlimited: beading, stained glass, calligraphy, card making, drawing, painting, pottery, carving, flowers, and creating all kinds of beautiful things in her own unique way. She had a knack for taking something ordinary and making it special.

Jo did all these things in such a humble way, that many people never realized that she had such an amazing, talented, and successful life. She lived as if every ability she had was given to her simply to share with her loved ones, to make their lives better—and she did. Because of this, her talents go on in the lives of her family, a family full of athletes, artists, singers, crafters, builders, teachers, coaches and archers.

The family invites those who knew Jo to her service at Sweet Home Community Chapel at 3:00 p.m., on Saturday, March 18th.

Archers – Please plan to bring your bow and a signed arrow to shoot at the target we will have in Jo’s honor.