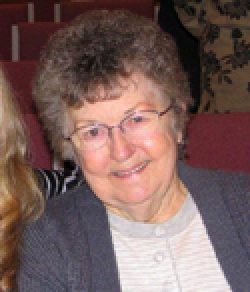 A memorial service to celebrate JoAnne’s life will be at 4 p.m. Sunday, September 18, at the First Baptist Church of Brownsville. Final burial will be at Baptist Cemetery in Brownsville. Memorial contributions in her memory may be sent to Teen Challenge Pacific NW, PO Box 609, Lebanon, OR 97355.

JoAnne Feckner , 75, woke in the presence of her Lord and Savior Jesus Christ on Friday, September 9, 2011. She was born in Shawnee, Oklahoma, on July 2, 1936 to Ernest “Jack” and Claricy (Brinley) McCormack. When she was six months old, her family moved to Lancaster, California. Her brothers, Odis and Clifford were born there.

JoAnne attended Antelope Valley High School where she met Victor Santino, Jr. They were married in May of 1952 and later divorced, but remained good friends. They had five children: twins, Gary and Mary, Karen Marie, and twins, Dennis and David. The family moved to Napa, California in 1964 and then to Yreka, California in 1965 – the place she would always call home.

In 1983 JoAnne moved back to Napa where she met George Feckner and they married on January 11, 1985. They traveled often to visit family and friends in Idaho and Oregon with plenty of stops along the way for fishing and crabbing on the Oregon coast. George passed away in 1988. He was the love of her life.

In 1990 JoAnne moved to Red Bluff, California to be near her sons, Dennis and David, and their families. Her mother, Claricy, joined her there, and many years of family gatherings were enjoyed by all. The grandchildren were particularly fond of Grandma’s Nintendo, swimming pool and hot tub.

JoAnne’s final move was to Oregon in the year 2000 to be near Karen and her family in Crawfordsville. She also cared for her mother until Claricy passed away on March 9, 2009. As JoAnne’s health declined, the need for assisted living presented itself and in March, 2011, she moved to Wiley Creek in Sweet Home. In the short time she lived there, she made many friends and enjoyed every minute of her time with them. She looked forward to playing Bingo and going on the occasional country drive and then to lunch.

Many friends and family members have been the recipients of her beautiful handiwork. She loved to knit, crochet, cross stitch, embroider and sew. Nothing brought her more joy than to be able to pick up a needle of any sort and put it to work on her next creation. Every family member has been blessed with one of her crocheted afghans and every grandchild has received a treasure box with a stand-up, cross-stitched nativity set.

The most significant public event of her life took place on May 22, 2011. It was her desire to be baptized as a testimony of her faith and belief in Jesus Christ. It was a glorious day for her to be surrounded by her closest family and friends.

JoAnne is survived by children: Karen and her husband John Joiner of Crawfordsville, David Santino of Gerber, California, Dennis and his wife Karen Santino of Ethel, Washington; grandchildren: Caleb Joiner of Lebanon, Daniel and Catherine Joiner of Seattle, Washington, Rebekah and Ryan Byer of Corvallis, Anna and Dawson Hunter of Lebanon, Abigail Joiner of Crawfordsville, Jennifer Santino and her fiance Tim Merrick of Palm Springs, Florida, Rachel Santino of Ethel, Washington, Danielle Fitts of Moses Lake, Washington; great grandchildren Noah, Joey and Ezra Fitts of Moses Lake, Washington. Near and dear to her heart are her nieces and nephews Deanna and Danny McClure, David and Sheri McCormack, Darryl McCormack and Doug McCormack all of Oklahoma. Many aunts, uncles and cousins held a special place in her heart too.

A memorial service to celebrate JoAnne’s life will be at 4 p.m. Sunday, September 18, at the First Baptist Church of Brownsville. Final burial will be at Baptist Cemetery in Brownsville. Memorial contributions in her memory may be sent to Teen Challenge Pacific NW, PO Box 609, Lebanon, OR 97355.