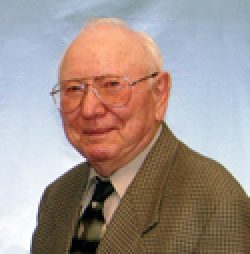 A funeral service will be held at 11:00 a.m., Saturday, April 28, at Sweet Home Mennonite Church. Final burial will take place at Gilliland Cemetery.

Jim worked most of his life in the timber and wood industry. Jim and Wilma moved to Sweet Home to enjoy their retirement in 1981.

Jim was an avid outdoorsman throughout his life, whether hunting, fishing, camping, or target shooting. Jim enjoyed children of all ages. He took great pleasure in watching baseball games whether in person or on television.

Jim’s military career started at a young age when he first enlisted in the United States Army, May 9, 1938, during peace time. He served in Panama until his discharge July 1940, when he went to work in the ship yards. Jim was drafted into WWII on June 15, 1943. He served in the Southern Philippines as a mobile artilleryman until the war’s end. Jim was honorably discharged January 16, 1946.

He is survived by his wife, Wilma Bright, and 21 nieces and nephews.

Jim was preceded in death by: his parents; brothers, Edgar, J.F, and Vernon; and sisters, Sunshine, Nancy, and Georgia Rose.

A funeral service will be held at 11:00 a.m., Saturday, April 28, at Sweet Home Mennonite Church. Final burial will take place at Gilliland Cemetery.