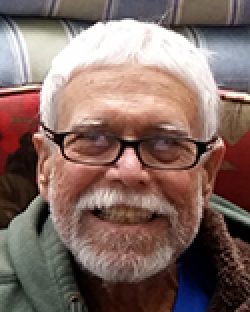 Jim, his baby brother, and their parents moved from Minneapolis to Yucaipa, CA when Jim was about seven years old. He attended Redlands High School in Redlands, CA. He lived in Southern California, then he settled in the Sacremento area of Northern California to work in the sheet metal trade.

After retiring from the trades, Jim started a family-run business called Tin Man Metal Products. He designed and built specialty pooper scoopers, traveling and selling them at dog shows up and down the West Coast. Jim and his family moved to Sweet Home, OR in 1991, bringing the business with them. After 15 years of running the business, he retired, much to the disappointment of his customers.

With his new-found time, he was able to focus on his hobbies, which included collecting memorabilia from his youth and building an HO train display. All along, Jim had been an avid sports fan, watching his favorite teams the LA Dodgers, the LA Rams, the LA Lakers, and USC football. His most favorite thing of all was spending time with his two granddaughters, Ashley and Sarah.

He was preceded in death by his parents, Russell Newton Laycock, and Vivian “Mickey” Carol Roisen.