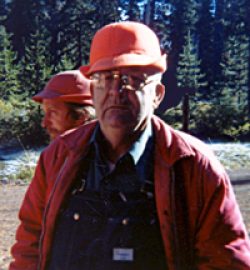 A graveside service will be at 1 p.m. Friday at Gilliland Cemetery.

James Ruil Holley was born in Scotts Hill, Tennessee to parents Jim and Dora (McCall) Holley. Ruil, as he was known to his family and friends, spent his early years in Tennessee and Missouri, before his parents settled in Oklahoma.

In 1937, he met and married Dimple Mae Quinn; a marriage that would last more than 70 years, until his death.

During his early married years, Ruil worked as a farmer before he moved his family to Wright City, Oklahoma, where he began a career working in sawmills.

He served with the Army during the latter stages of World War II.

In 1951, he made his final move with his family to Sweet Home, where he worked in the lumber industry until his retirement.

Ruil enjoyed hunting trips with his family; fishing the local lakes with his brother, Jimmie; and growing one of the best vegetable gardens in the area. He and his wife, Dimple, would can up to 200 quarts of vegetables each year and share them with their kids and their families.

Ruil was preceded in death by sisters Vera, Nina Jane, Polly, Inez, and Melba; brothers Bill, Alton and Jimmie; and son Billy in 2007.

He is survived by wife of 70 years, Dimple; brother Jack of Dallas, Texas; sons David and Tom, of Sweet Home; daughters Betty of Aloha and Shirley of Springfield; daughter-in-law Carolyn Holley of Rogue River; many grandchildren; and several great-grandchildren and great-great-grandchildren.

A graveside service will be at 1 p.m. Friday at Gilliland Cemetery.