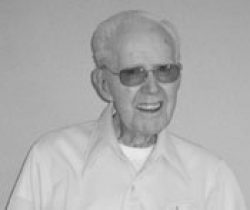 James Ellsworth Crabtree, age 91, formerly of Sweet Home, Oregon, died Tuesday, September 11, 2007 at his home in Quartz Hill, California. He was born on June 30, 1916 in Stayton, Oregon; the son of Marble and Alice May (Matten) Crabtree.

James served in U.S. Navy Construction Battalion (Seabees), from August 7, 1942 to December 12, 1945. He built runways in the Aleutian Islands and Tinian Island in the Pacific.

He worked in the construction field for his entire working career as a heavy equipment operator. The nature of his career entailed moving from one job to another.

When his daughter, Cheryle, was high school age, they moved to Klamath Falls, Oregon. James believed she should go to high school in the same school for all four years. During that period, James opened a Texaco service station, and when Cheryle graduated, he went right back to construction. James worked on both Foster and Green Peter dams in Sweet Home, Oregon.

After retiring in 1981, he became active in the Sweet Home Elks Lodge, No. 1972, for 64 years, where he had been a Life Member and was a past Elk of the Year. He was associated with the Navy’s Civil Engineer Corps and the Seabees Historical Foundation.

He enjoyed family gatherings and birthday parties. He and his wife Beverly spent many hours in their boat, fishing on Foster Lake. He was a superior craftsman, making beautiful wood products. He always had a large garden and canned his homemade applesauce.

Beverly, his wife, passed away in 2001. James continued living in Sweet Home until in August of 2005, when he moved to Quartz Hill to live with his daughter and son-in-law.

An avid card player, he joined the cribbage group at the Lancaster Elks Lodge. James maintained a faithful attendance at the Church of Christ in Rosamond, California, until he became ill.