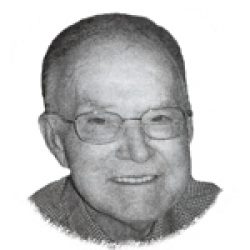 Ivan Thompson, age 83, of Sweet Home passed away Monday. He was born in Siam (near New Market), Iowa.

Ivan married Ruby Smith on August 13, 1946 in Hiawatha, Kansas. They settled in Holley for a while, and then moved to Siletz, Oregon for a few years before moving back to Sweet Home 54 years ago.

Ruby passed away of cancer in 2000. Ivan married his present wife, Edith, seven years ago.

He was drafted into military service at the age of 18. He had a very distinguished and honorable military career. He fought in several battles, including The Battle of the Bulge and the Omaha Beach Landing. He served in France, Germany, Luxemburg and Belgium, receiving medals in the European, African, and Mid Eastern countries. He was a member of the 5th Division of the 11th Regiment (nick named “The Red Devils”) that freed Luxemburg in WWII.

Ivan moved to Oregon in 1946 to get into the timber industry. He was a self taught cat skinner for 50 plus years. He also worked many years serving the Lord as a deacon and elder and was involved with the Turner Convention. Ivan enjoyed Bowling and TOPS.

He was preceded in death by his wife of 50 plus years, Ruby, three brothers, and one sister.

Memorial contributions can be made to Hospice or a charity of your choice.