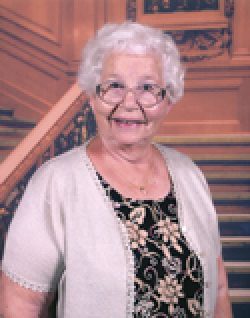 Inurnment will be at Juniper Haven Cemetery at a later date.

Iris Fuller, 88, of Sweet Home, Oregon finished her struggle with cancer on Monday. She will be greatly missed by her family. She was born in Kennewick, Washington to Melvin Arthur and Elma Joan (Carson) Bozarth.

She lived in Portland until her family moved to Central Oregon where she finished the last three years of high school. She was married to Elroy Lamon Fuller on April 21, 1946. She was preceded in death by her husband of 64 years, as well as both of her parents.

Iris was an avid reader and enjoyed a variety of crafts and homemaking, which included sewing, baking, cooking, and canning.

She was a collector of Christmas decorations, antiques, plates, rocks, and many things pertaining to the ocean. She was a strong supporter of any school activities in which her family was involved. Iris was a reserved lady with a kind and giving heart.

Inurnment will be at Juniper Haven Cemetery at a later date.