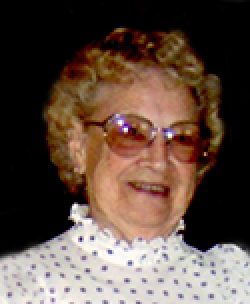 Memorial service will be at 11:00 a.m., Monday, January 4, 2015, at Sweet Home Funeral Chapel with inurnment at Gilliland Cemetery.

Irene May Eberhard, 94, of Sweet Home passed away Thursday, December 17, at her son’s home in Elgin. She was born September 15, 1921, in River Sioux, Iowa to Floyd and Viola (Weldon) Harper. When she was 23 months old, her mother passed away, and she and her sister were raised by their paternal grandparents, Mr. and Mrs. Elijah Harper, on their farm east of Pisgah, Iowa.

Irene graduated from Pisgah Consolidated School in 1938. In 1941, she married Kenneth L. Eberhard in Rockport, Missouri after which they lived in Iowa. They moved to Oregon in 1943. Irene resided in Sweet Home since 1951.

Irene was a member of the “Community of Christ Church” in Albany and a member and past president of the Albany Eagles Auxiliary, serving as a State Officer for three terms. She was also a member of the V.F.W. Auxiliary and Royal Neighbors of America in Sweet Home.

In the 60s, Irene was a co-owner of the Mode O’Day dress shop and later worked as a checker in local grocery stores for over 29 years. She was also employed at Speedee Mart and worked for the Workman & Steckly Funeral Chapel for 17 years.

She was an avid sports fan and especially loved bowling and pro bowling for many years, as well as attending her granddaughter, Ronda Bennett’s, softball games. Watching NBA Basketball and Mariners Baseball games on TV was another enjoyment; along with playing pinochle with the Elkettes, “Scrabble” with her friend of 50 years, Evelyn Junke, and crossword puzzles.

Irene loved her family and was very fond of her cats, Bandit and Squeaker, Bo and Kali, and Mi-Mi and Kitty.

Memorial service will be at 11:00 a.m., Monday, January 4, 2015, at Sweet Home Funeral Chapel with inurnment at Gilliland Cemetery.