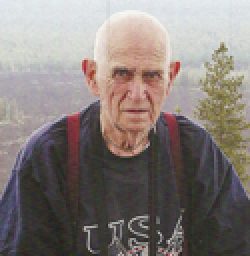 Howard Vincent Drago, Sr., 93, of Sweet Home, our beloved father, grandfather and friend, died September 23, 2011 of natural causes at Country Meadows Care Home in Woodburn. Howard was born July 5, 1918 and was one of five children born to Louis and Alice (Walsh) Drago in Greenwich, Connecticut. He was raised in Greenwich and attended and graduated from Greenwich High School.

He was drafted in 1942, during World War II, and spent three years as a medical/surgical technician in the Army Air Forces in England treating wounded pilots who had returned across the English Channel.

In 1945, he was transferred back to Oxnard, California, and then eventually to Portland, Oregon. It was there that he met and married Marvina “Billie” Harris, who preceded him in death in 1990. They have three sons and one daughter.

After the time served in the military, Howard started working in what is now known as Oregon Department of Fish and Wildlife, a career that lasted nearly forty years. He retired as manager of the South Santiam Fish Hatchery in the late 1970s.

Howard could most often be found volunteering with local community organizations. There were few, if any, Sundays that he wasn’t either working a breakfast for the Elks or helping out at church. Howard has been a member of the Elks since 1957 and has held every possible position. He’s been Elk of the Year, Officer of the Year, Exalted Ruler, Trustee, and Honorary Life Member, and he served as all of the committee chairs. He helped maintain the Meadow Wood Speech Impediment Camp, a primary recipient of Elks support. He assisted in providing wheelchairs and walkers for those in need and helped with the all-night Senior Alcohol Free Entertainment party for graduating seniors at Sweet Home High School.

He also organized a golf tournament every year for the Elks to raise money for the Casey Eye Institute Clinic for Children. He collected items for holiday gift baskets. He also did the shopping for the breakfasts for the Elks and the church.

In addition to volunteering, Howard enjoyed watching a good NBA or NFL game on television, playing cards with friends and having family visit. He enjoyed traveling and spending time with his family and friends. He made numerous trips to Mexico and enjoyed trips to Sunriver.