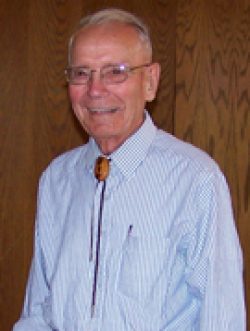 A celebration of life will be held Saturday, Dec. 20, at 1:00 p.m., at First Baptist Church in Sweet Home with Pastor Danny Wyatt officiating. Final burial will be at Gilliland Cemetery.

Howard Miller, age 90, passed away on Thursday, December 11, 2008 at his home. He was born on September 7, 1918 in Stipek, Montana; the son of Martin and Fannie Miller. He was raised in Colorado.

Howard came to Sweet Home, Oregon in 1946 where he met Jean Pittsley. They married in 1949 and lived in Sweet Home for two years, and then moved to Crawfordsville where they lived for 40 years. In 1991, they moved back to Sweet Home as their last residence.

He worked as a logger and mill-worker for most of his life. He was co-owner of Miller Tractor in Lebanon with his brother, Ben. After the business was sold, he returned to private logging and got his real estate license.

He was an active member of First Baptist Church here in Sweet Home since Oct. 16, 1949. He enjoyed serving anywhere; mowing the lawn, singing in the choir, teaching, being a deacon, and a Northwest Church Builders volunteer.

He once attended Bible college. Howard depended on God to direct all aspects of his life. He loved his family, church family, and friends and tried to live his life in a way that would lead others to know his Lord and Saviour.

He enjoyed woodworking and rockhounding. He is most known for his quilt making. For 13 years it has been a joy for him to make approximately 100 per year and give them away to charities and churches.

Howard is survived by daughters and sons-in-law, Connie and Rick Hershberger, Helen and Mike Miner, and Marilyn and Randy Colburn, all of Sweet Home, and Lois and Doyle Shaw of Philomath, Oregon; sister, Frances Brown of Walsh, CO; grandchildren, Christin, Rayna, Tara, Jeff, Amanda, and Megan; and one great grandchild.

He was preceded in death by his wife, Jean, in 2001 and siblings, Monroe, Iva Litke, Mary Adams, Ben, Cleo Litke, Martin, John, and Roy.

A celebration of life will be held Saturday, Dec. 20, at 1:00 p.m., at First Baptist Church in Sweet Home with Pastor Danny Wyatt officiating.

Final burial will be at Gilliland Cemetery.

Donations can be made to the First Baptist Church in Sweet Home or to The Gideons; International Bibles Fund.