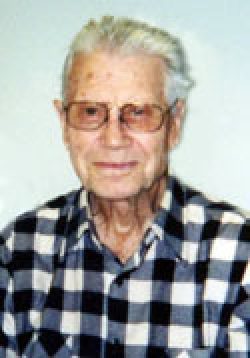 Memorial contributions can be made in his name to Avamere Twin Oakes of Sweet Home, c/o John Buckley, 950 Nandina Street, Sweet Home, Oregon 97386.

Guy A. Jeppsen, age 88, of Sweet Home passed away Wednesday, February 3, 2010. He was born in Salmon, Idaho to James Sylvester and Georgina Olina (Andersen) Jeppsen.

Guy married Martil Phillips June 1945, and he and Martil moved into a new home in Holley, Oregon. They lived in the same house until 2006 when they both moved to Wiley Creek Assisted living in Sweet Home.

Guy loved his family, music, and logging. Guy played the fiddle, guitar, mandolin, and steel guitar and could play three instruments at once. There is a great video of Guy playing his fiddle, steel guitar and electric piano. Guy taught all of his children and grandchildren to play music with him. In his younger years, Guy played at dances all around Linn County. In his later years, he enjoyed playing at JJ’s Music and having jam sessions at their home.

Guy owned and operated J&J Logging in the 1950s with his cousin, Duke Johnson. Later, it became Guy Jeppsen Logging, and remained so until the late 1970s.

Never far from the woods, Guy helped out other self-employed loggers until he was in his 80s. Guy worked out of his shop repairing equipment for “Gypos’s” and larger logging companies. His children remember long hours their dad worked to get equipment repaired so other loggers could get back to work. He charged affordable prices to everyone and actually did free jobs to those loggers having hard times. People drove from miles around to have Guy work on their rigs. His wife and children admired and loved this hard-working family man, and they will miss him and his great smile and silly jokes he told so often.

“I love you grandpa and will think of you everyday for the rest of my life.”

Memorial contributions can be made in his name to Avamere Twin Oakes of Sweet Home, c/o John Buckley, 950 Nandina Street, Sweet Home, Oregon 97386.